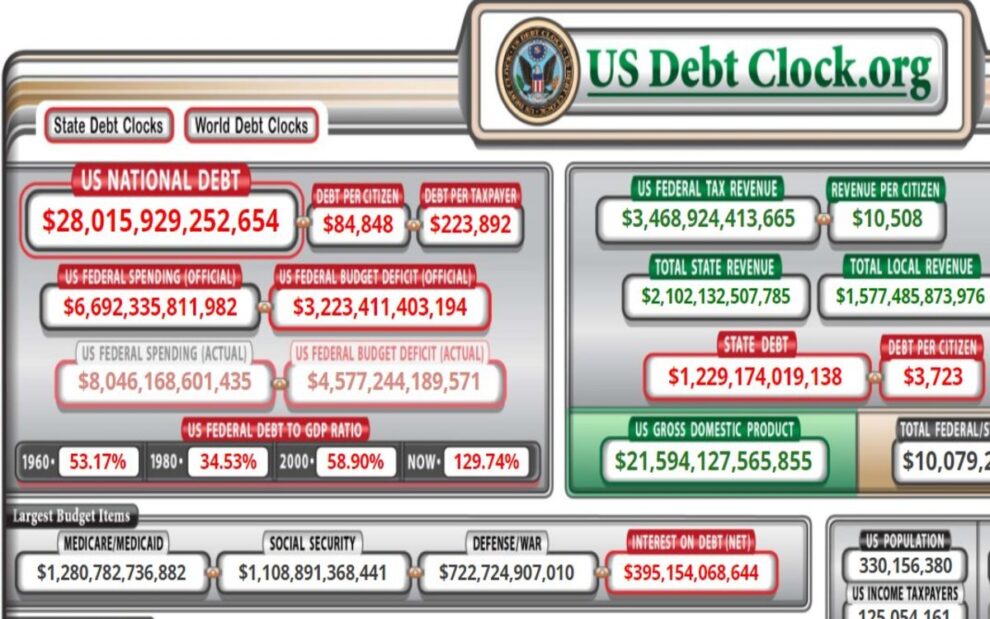 To fight the COVID-19 pandemic, American authorities spent huge sums of money. However, because there is still a lack of money in the budget, they had to raise funds in the market. As a result, public debt in the U.S. has now reached $28 trillion, about 101% of the GDP. The U.S. only experienced something similar in 1946, directly after the end of World War Two when debt reached 106% of GDP.

Future generations in the U.S. will have to pay for today’s economic mismanagement.

Government debt was projected to exceed the size of the U.S. economy in ten years’ time. Unfortunately for Washington, this projection was achieved much faster, with the COVID-19 pandemic and the huge expenses to support the national economy partly to blame. According to independent estimates, last year the U.S. Federal government pumped almost $9 trillion into the economy. As a result, public debt reached $28 trillion, or 101% of GDP.

Jerome Powell, head of the federal reserve system, did not see a problem in this and even argued that the large loans served as a bridge over the economic abyss of quarantines, falling consumer spending, and the millions of unemployed who have to pay their bills.

However, Lawrence Summers, former Vice President of Development Economics and Chief Economist of the World Bank and former Treasury Secretary under President Bill Clinton, argued that the stimulus turned out to be excessive.

“The [Federal Reserve] has stuck to its guns on no rate hikes for years and years and continuing to grow its balance sheet,” he told Bloomberg. “What is kindling is now igniting. I’m much more worried that we’ll have either inflation or a pretty dramatic fiscal-monetary collision.”

He added: “I think this is the least responsible macroeconomic policy we’ve had in the last 40 years. I think fundamentally, it’s driven by intransigence on the Democratic left and completely unreasonable behavior on the whole of the Republican party.”

As the economic situation deteriorates, it is necessary to borrow more money. The huge budget deficit is mostly covered by the sale of government bonds. In 2020, the deficit more than tripled to $3.1 trillion, but once all the measurements to fight the pandemic are accounted for, it will likely reach $4 trillion.

The Federal Budget Commission estimates that after the pandemic, debt will reach 117% of GDP by 2025 if the economic recovery is slow. For the time being, this does not worry investors and does not prevent the U.S. from accumulating more debt as for now it is cheap. This is very short-term thinking though.

Setting aside Senator Thune’s warning, JP Morgan Asset Management claims that what matters is not the debt itself, but its service fee.

“Despite the surge in government debt to combat the effects of the pandemic, the cost to service this debt is much cheaper than it was in, for example, the mid 90’s to early 00’s when debt to GDP was below 50% and the government operated with a budget surplus,” JP Morgan Asset Management claimed.

If rates rise, net interest costs as a share of GDP will rise from the current 1.3% to 3.2%. According to some estimates, in 2028, Americans will spend a fifth of the state budget to cover only the interest of their public debt. In addition, about half of U.S. public debt is owned by foreign investors, followed by China. Beijing holds $1.1 trillion in government bonds and periodically threatens to sell them out.

If such a scenario is implemented, the Federal Reserve will redeem the securities from the market in order to maintain low interest rates and lower borrowing value. This will only have a short-term effect. Investors will eventually lose confidence in the U.S. government’s ability to repay borrowed money, and will then likely start selling securities and demand higher interest rates. This will have serious economic consequences.

An increase in interest rates will reduce the market value of outstanding government bonds. As a result, a number of financial institutions, including mutual funds, pension funds, banks, insurance companies and other sovereign debt holders, will suffer major losses that could end with a new wave of bankruptcies and another financial crisis similar to 2008.