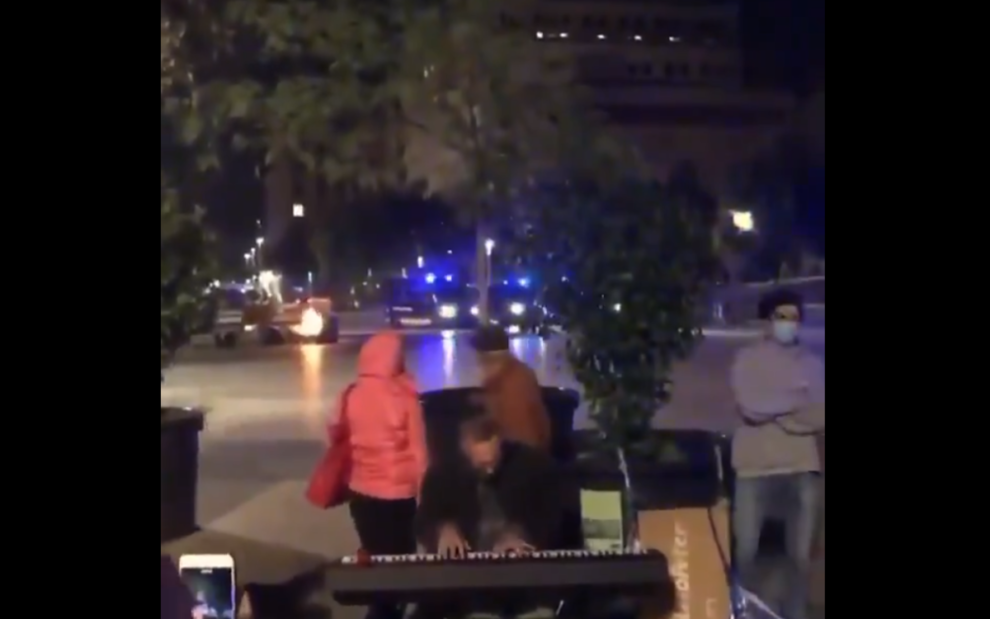 A video surfacing online shows a man playing the piano while the world literally crashes and burns around him. It looks similar to the scene from Titanic where musicians continue to play calmy as the ship sinks. The video shows the man playing “Eternal Flame” on his piano as anti-lockdown rioters start fires and clash with the police. The video was captured amidst protests in Barcelona, Spain.

The protests erupted after Prime Minister Pedro Sánchez issued orders declaring a state of emergency and imposed a nationwide curfew between 11 pm and 6 am on October 2. The orders were issued after concerns regarding the second wave of coronavirus became more pronounced. The Prime Minister only allowed residents to leave the premises of their houses for essential journeys. As a result, protests emerged all over Barcelona, Spain. The protestors clashed with the police and caused considerable damage to public property.

In the video, a large crowd of angry protestors can be seen charging in the direction of a police car on a near-empty street. The protestors can also be seen pelting the police car with various objects, including a set of metal railings and stones as the car attempts to drive away from chaos. Two police officers can also be spotted nearby on their bikes. One of the policemen can be seen being pushed off by the bike by a protestor, the police man is attacked and thrust on the ground.

The woman recording the scenes of protests from a building above can be heard screaming ‘Oh my God’ in horror as she watches the terrifying events unfold in front of her eyes. Shortly after the video was recorded, police assistance soon arrived at the spot and many of the rioters ran away to avoid being arrested.

A day before this footage was recorded, around 50 protestors attacked police with stones in Barcelona. The rioters also set rubbish containers on fire and looted empty shops. Fourteen people were arrested and 30 people were injured after clashes with the police.

Miquel Samper, Catalonia’s regional interior minister told the press that declaring a curfew across Spain had become a necessity after most groups neglected calls to keep personal contacts and opportunities for exposure to a minimum. The authorities feared that the second wave of coronavirus might be on its way. “The prohibiting of night-time movement has one goal. For weeks, we have said that no one should go out at night, or meet with several people, or consume alcohol at these parties called ‘botellon.’ But it is obvious from images we have all seen that we have not been successful” said Samper

The video of the man playing his piano made rounds on social media.