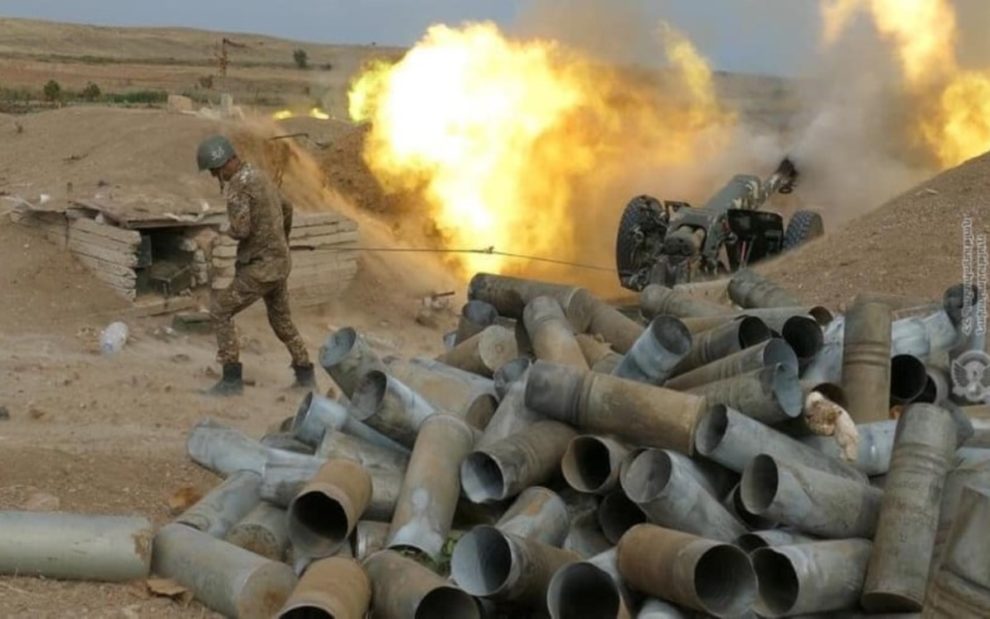 Artsakh, or more commonly known as Nagorno-Karabakh, experienced intense warfare in which thousands were killed and tens of thousands were driven out of their homes in only a month and a half of fighting that waged on until the Russian-brokered ceasefire two weeks ago. The conflict between indigenous Armenian forces and the Turkish-backed Azerbaijani military and their Syrian mercenary allies was described on October 1 as a “battle for survival” by Armenian Prime Minister Nikol Pashinyan.

Yet, despite the existential crisis in Artsakh, internationally recognized as a part of Azerbaijan but historically and demographically Armenian, Yerevan never fully committed to the war effort.

Colonel General Movses Hakobyan of the Military Supervision Service made a damning testimony on November 19 that revealed how the Armenian leadership made minimal efforts in what was supposed to be a “battle for survival.” He revealed that by October 30, more than a month after the war began, that only 70% of Artsakh’s forces and 52% of reservists in Armenia had been mobilized. According to him, Armenia’s military doctrine determines that near full mobilization should be achieved within 48 hours of a war beginning. He also said that on the third day of the war Pashinyan had ordered the supply of regular Armenian reservist to Artsakh be halted and replaced with only volunteer detachments.

By downgrading mobilization to only volunteer detachments, a potential 200,000 reservists were not utilized. In fact, although government and military officials were calling for diaspora Armenians to fight in Artsakh, it has been revealed, at least in Greece, that volunteers were put on a list and would be deployed only if the situation demanded it. Hovik Kasapian, a leading member of the Armenian National Committee of Greece, also said that many ethnic Greeks had volunteered to fight in Artsakh but were rejected because Armenia did not want to put Athens in an awkward diplomatic situation, despite the fact that many of the Greek volunteers were highly trained ex-special forces. Pashinyan defended the necessity of the highly controversial ceasefire by claiming that Artsakh did not have enough manpower to defend against the Azerbaijani military, but Armenia had not even come close to using all the resources available.

The question begs though why Yerevan in a supposed “battle for survival” would be concerned about potentially creating diplomatic issues for Greece when Artsakh was completely abandoned by the West. In a so-called “battle for survival” it would be expected that Armenia would use any assistance offered, especially since Turkey had no qualms sending mercenaries. Instead, Armenian and foreign volunteers were only put on standby or rejected, Armenian and Artsakh forces were never fully mobilized, powerful Iskander missiles were used infrequently and the Armenian Air Force barely featured during the war.

What motivated Armenia’s non-commitment to the war effort is still unknown.

But for all the military mistakes of Pashinyan and his administration, the biggest miscalculation was his attempt to pivot Armenia towards the EU and even flirt with NATO. Pashinyan came to power off the back of the so-called Velvet Revolution in 2018. It was hoped with his accession to power that Soviet-era oligarchical rule and corruption would come to an end. However, as is often the case in post-Warsaw bloc countries, the belief is that replacing communist-era political and oligarchical structures can only be achieved by straining relations with Moscow and pivoting towards Western liberalism. Armenians of course have the right to demand an end to oligarchical corruption and domination, but this should only have been achieved without antagonizing traditional geopolitical alliances.

A report by EurAsia Daily documented Pashinyan’s appointments after coming to power, especially those associated with NGO’s funded by famous Russophobe billionaire George Soros. One appointment by Pashinyan was Armen Grigoryan to Head of the National Security Council. Grigoryan was the Election Program Coordinator of Soros Foundation-funded Transparency International, an NGO that sponsors so-called color revolutions. David Sanasaryan was appointed as Head of the State Audit Service but is known for throwing eggs at the Russian Embassy and demanding the withdrawal of Russian military base from Armenia. Babken Ter-Grigoryan was appointed as deputy minister for the Armenian Diaspora and formerly worked at Transparency International too. And these are just some among many.

Although Eastern European countries may have opportunities to engage in dramatic social, cultural and economic changes towards Western liberalism with the direct support of the EU, the geography of Armenia dictates its realistic alliances. Armenia as a small, mountainous, landlocked and impoverished country of only 3 million people is wedged between Georgia, Azerbaijan, Iran and Turkey, and nearly 1200 km away from the closest EU member, Cyprus. Yerevan’s closeness and eventual accession into the EU is not a realistic prospect. Geography must determine Armenia’s foreign policy. Armenia relies on Iran for goods from the outside world, Turkey and Azerbaijan are hostile and maintain embargoes on Armenia, and Georgia has proven in action that they side with Armenia’s enemies by allowing Turkish planes to cross its airspace to land Syrian mercenaries in Azerbaijan.

A part of the EU system is peaceful coexistence among member states. This has actually been one of the few successes of the bloc after inheriting a continent plagued by millennia of war, genocide and devastation. The EU also operates because of open borders between member states that are contiguous with each other. Armenia is separated from EU member states Greece and Bulgaria as Turkey is located between them. Armenia will not have an opportunity to join the EU unless Turkey becomes a member state, which is a prospect certainly not foreseeable in the near future.

The geostrategic mistake was motivated by Pashinyan’s delusions of turning Armenia into a Western-styled liberal state despite being in a hostile region surrounded by enemies and far detached from the EU. This folly was exposed when the Turkish-sponsored invasion of Artsakh began and the West made no actions besides rhetorical sympathy.

In the end, with the failure to defend Artsakh militarily, it was Russia that had to intervene to bring an end to the conflict. This was despite the fact that Pashinyan had pivoted towards the West and stacked his administration with Russophobic Soros Foundation-funded members under the guise of supposedly fighting oligarchical rule and corruption that originates from Russia.