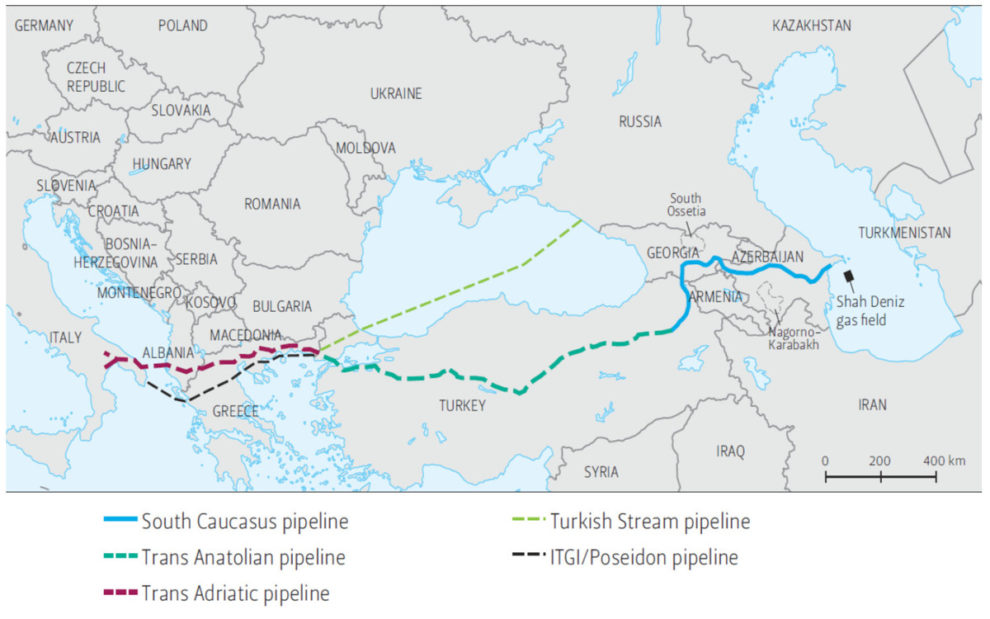 The Trans-Adriatic Pipeline (TAP) will become operational in November and will deliver Azerbaijan’s gas from the Caspian fields to countries in southern Europe. This gives Russia a new competitor in the European energy market. This would have raised questions in Moscow – is TAP a competitor to the TurkStream and can it really challenge Russia’s Gazprom market share in southern Europe?

The construction of TAP is practically completed and the pipeline is already filled with Azerbaijani gas. There are only some technical formalities that remain to be done in order for Azerbaijani gas to flow into Greece, Bulgaria and Italy. The gas pipeline is a competitor to Russian gas and the TurkStream. The TurkStream begins from the town of Anapa in Russia’s Krasnodar Krai to Kıyıköy in northwest Turkey and continues into Greece.

Turkey is trying to become an energy hub so that it can control flows from Russia and Azerbaijan to Europe, but also from the East Mediterranean and other Middle Eastern countries. However, with a Turkish-sponsored war raging in Artsakh, or more commonly known as Nagorno-Karabakh, regular gas deliveries from Azerbaijan is already under threat as Armenian forces could target an Azerbaijani pipeline at any moment.

Despite Turkey attempting to become a transit country, it has evidently shown it is not interested in stability as it continues to foster and support hostilities and conflicts in key energy-producing regions such the East Mediterranean, Iraq and Libya, while supporting extremist militants in Syria, another potential transit country. Turkey controls the gas flows from Azerbaijan and Russia to southern Europe, but at the same time, Greece, to the same extent, controls the gas flows that pass through Turkey and onwards to other parts of Europe.

TAP is part of the “Southern Gas Corridor.” On the Greek-Turkish border, TAP connects to TANAP (Trans-Anatolian gas pipeline), which already delivers gas from Azerbaijan via Turkey and Georgia, purposefully bypassing Armenia. Gas from the Azerbaijani Caspian field, Shah Deniz, will reach its final destination, a receiving terminal in southern Italy. The TAP gas pipeline is 878 kilometers long and will be able to deliver 10 billion cubic meters of gas annually to Greece, Bulgaria and most of Italy. The cost of the project is around €4.5 billion.

This year, the European gas market has brought many surprises. The COVID-19 quarantine, together with the economic crisis, the warm winter, and record gas reserves in underground storage facilities after winter, have contributed to the fact that gas consumption in Europe has dropped considerably. Most importantly, prices on the European spot market have dropped drastically. There was also a unique situation when LNG became extremely cheap, even cheaper than gas from pipelines.

Gas prices fell the most when consumption dropped this year. At the moment, such oscillations are happening so much so that the price is falling and rising significantly in such a short period of time. When the winter is harsh, it turns out that there is little gas in the warehouses, and when it is warm, the quantities are excessive. Now the oscillations are in force, which makes it too early to talk about prices. However, the situation with prices is currently improving, so it is expected that the beginning of the winter season will cause a further increase in prices.

Along with the South Caucasus gas pipeline, the TAP and TANAP gas pipelines are part of the “Southern Gas Corridor” project, which was announced as a key strategy for lessening Europe’s reliance on Russian gas.

The question here is what southern Europe will do. If there is no crisis then suppliers will be able to increase the volume of gas. If there is a serious crisis, then the question of savings will arise and they will procure cheap gas. Southern Europe will buy gas from anyone who sells it cheaper. For example, Russian gas can be transported as far as Spain and Portugal.

With Turkey increasingly in the spotlight due to its multiple hostilities and military interventions in Libya, Syria, Iraq, Cyprus, Artsakh and the East Mediterranean with Greece, it has become an unreliable transit state for gas deliveries. Although the TurkStream must pass through Turkey to reach European markets, it arrives in the country via the Black Sea, a much less hostile zone compared to Azerbaijan at the moment. With the Azerbaijani pipeline passing just a few kilometers from Armenian-controlled territories, it makes it vulnerable to attacks. Although the Armenians have not yet targeted the pipeline, its vulnerability in the context of a Turkish-sponsored war, makes it a significant risk, meaning southern Europeans are no less reliant on Russian gas despite hopes in many countries that it could wean itself off Russian gas.