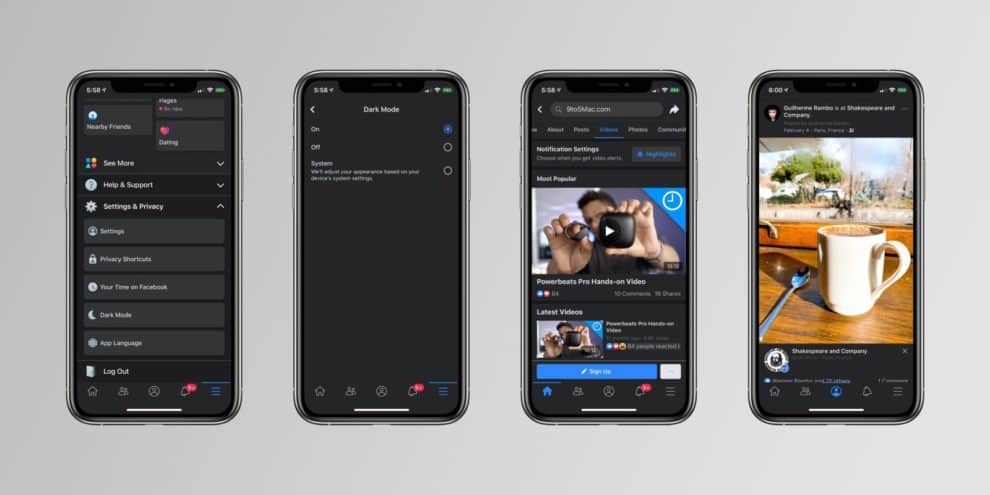 Recall that last month, Facebook rolled out the dark mode feature to its desktop interface. Now, the company has finally confirmed that it’s already rolling out the feature to the first eligible people using the mobile app. That came after a long time of demanding that the feature be made available to the Facebook mobile app. According to SocialMedia Today, the platform that first discovered the new development, Facebook is only pushing out the dark mode feature to a few people using the mobile app for iPhone. However, there’s an assurance that the feature will be available to all mobile app users later.

Facebook Dark Mode For iPhone / iOS Already Out For Some Users

According to a few users across different social media platforms, including Twitter, they are already enjoying the dark mode feature on their Facebook mobile app for iPhone. Let’s have a quick look at one of them below:

According to a Twitter user @NotFridayCraig, he has received the new Facebook dark mode feature on his iPhone.

Here’s what the user tweeted a few days back about the newly added feature.

So far, only a small percentage of Facebook users globally are still able to receive the new dark mode on their iPhone devices. However, there is an assurance that the feature will come to all mobile app users sooner than later.

No doubt, there are a number of benefits attached to using the dark mode feature on the mobile app. To some users, it helps content on the apps to become much easier to view for them. Apart from that, many users opt for the feature on their mobile app because it helps to improve visual ergonomics by reducing eye strain. However, the most common one is that it helps to reduce energy consumption on devices with OLED or AMOLED screen displays.

It’s worth noting that the dark mode feature also has its own disadvantages. One such is that it can sometimes be difficult to read small text with dark mode enabled.

In case you’ve been waiting for so long for the feature to roll over to your device, well the time is pretty close. For now, there’s no official timeline yet as to when the Facebook dark mode feature will be available to all mobile users. However, since a few iPhone users are already receiving it across the world, you can trust that it’ll be available to you sooner than later.

How to enable Facebook’s dark mode on iPhone / iOS

According to the screenshots of dark mode for iOS / iPhone below, a user can easily enable dark mode on Facebook by going to settings & privacy option and then selecting Dark Mode under it.

Trump’s Facebook ban likely to be overturned in coming weeks