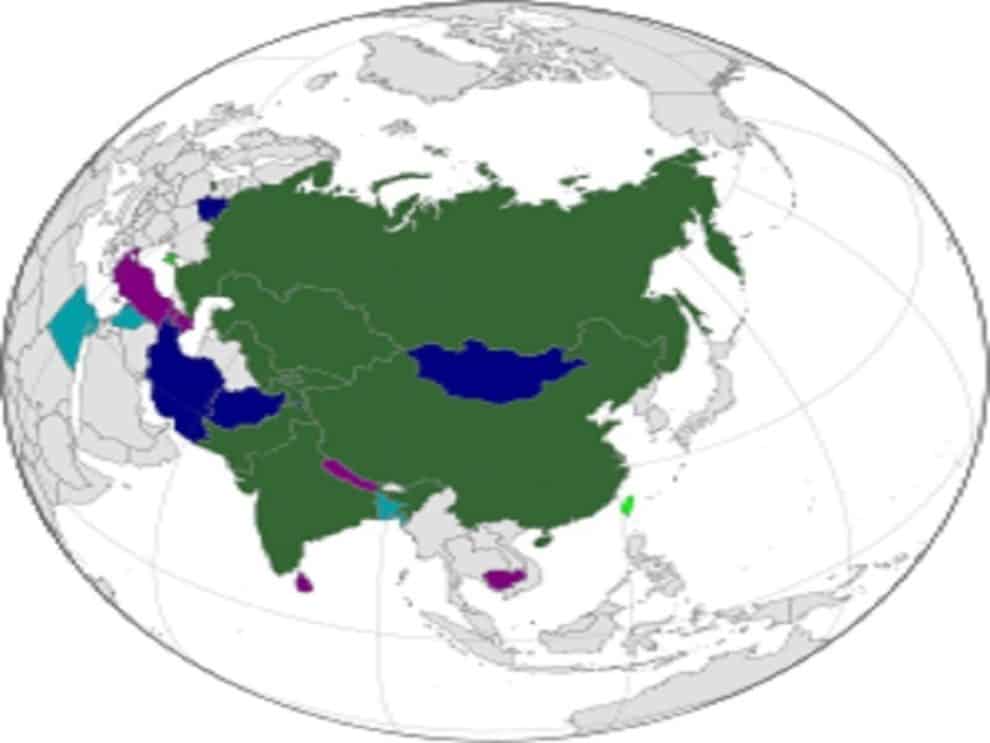 The Shanghai Cooperation Organization (SCO) is a leading organization for political, economic, and security concerns. Security challenges of the post-Cold War era necessitate new thinking of cooperation and security at the state level. In 1990, China decided to undertake a more active role in developing a new forum to address security problems, especially on its periphery. The converging policies of China and Russia founded the forum of the Shanghai Cooperation Organization. China and Russia are two major members of the organization. As the primary leader of the organization, China offers economic cooperation to Central Asian states whereas Russia offers political-military cooperation. The SCO brought together China, Russia, and the Central Asian states with six dialogue partners and four observers. The membership was extended further outwards with India and Pakistan as full members of the organization. Turkmenistan is the only Central Asian state which is not a member of the SCO and sends her representative as a guest due to endless neutrality.

The initial mandate of the organization was to promote regional security and protect member states from non-state security threats. The SCO’s policymakers always argue that the organization is not an alliance and not a balancing tool against the West or any other state. In the region, China is a key player of the Central Asian states’ economies, especially after the development of the One Belt One Road, and Russia is still acting as an elder in Eurasian politics and security. By contrast, the United States started disengaging from the region under the Obama Administration, but under the administration of Trump, there are signs that US forces may stay in Afghanistan. The geographic reach of the organization significantly expanded to India and Pakistan. Security problems and conflicts, especially the issue of Kashmir, became the extensive agenda of the organization. China was worried about the dilution of her role in the SCO after the inclusion of India while Russia understands that the inclusion of India as a full member of the organization would be a check on Chinese influence within the group, unlike India-Russian relations which have been cool since the last decade. India understands that Chinese economic diplomacy in South Asia, particularly CPEC, maybe a plan against Delhi to contain her regional strategic interests. India is the only country in the SCO which does not endorse the Chinese project BRI (Belt and Road Initiative).

In this context, India has launched the project of developing the Iranian seaport of Chabahar to counter Chinese influence in the Indian Ocean. India and Pakistan have issues relating to the current border situation and Kashmir. That’s why during the Astana Summit, the Prime Ministers of India and Pakistan could not go beyond customary greetings. However, there are differences of interests among the SCO countries, but they are facing some common threats regarding terrorism, extremism, separatism, and drug trafficking. Some typical threats originate from the vicinity of Afghanistan. Kazakhstan is facing these threats and has balanced her foreign and security policy towards major powers of the region along with Beijing and Moscow. It can do business with the Russian Federation through the CSTO and with China through the SCO. Within the framework of SCO mechanisms, cooperation is expanding in the law enforcement and security realm, oil and gas pipeline security, counterterrorism, and counter-drug trafficking. Kazakhstan has played an active role in several issues within the SCO. The Foreign Minister of Kazakhstan called on NATO to establish dialogue with the SCO in February 2013. It was a message that the SCO was not an anti-NATO bloc. During the SCO Dushanbe Summit in 2014, the Presidents of Kazakhstan and Tajikistan stressed that the SCO member states should solve existing border issues and ensure food supply security. In addition, they noted the issue of water shortage that might affect the stability of the region. In December 16, 2017, Bishkek-Moscow signed prominent documents for cooperation. This document is a vital document for Kyrgyzstan’s survival because it is a weak state without energy resources. For the same reason, Kyrgyzstan joined the SCO, as well as the CSTO military alliance led by Russia. The concept of Kyrgyz foreign policy is focused on cooperation with neighbors and the SCO. Kyrgyzstan joined the Shanghai Cooperation Organization after the security assurance of the primary member of the forum.

Russia wanted cooperation between the SCO and CSTO in 2003, but Uzbekistan threatened to leave the SCO due to its aversion to the CSTO. Uzbekistan left the CSTO in 1999. Uzbekistan does not participate in SCO military exercises, which Tashkent suggested to lessen the security of Shanghai Cooperation Organization members. The Uzbek President again demonstrated an ambivalent and independent nature of his country in regional and international politics because it needs a safe transit route for foreign trade. The SCO forum is a vital source to pursue this objective as Uzbekistan does not like to be a part of any military alliance and organization such as the CSTO. It wants to be neutral. Although Uzbekistan and Russia have a difficult relationship, both are larger foreign trade partners. Karimov had previously broken Uzbek policy regarding the resolution of the Ukraine Crisis and had criticized Moscow, but then stated that Russian interests should be taken in to account. However, Uzbekistan fears that the SCO might develop in the wrong direction and suggested that the SCO should remain outside any bloc and military-political alliance.

The Shanghai Cooperation Organization has developed as a border arm control organization via its regional counterterrorism body. Cooperation among the members and observers is at a great level but lacks common targets. The wide-ranging agenda of the SCO and diverse membership weaken its capabilities and potential. The member states and observers of the organization have their own agenda and national interests. For instance, Russia is keen to re-establish its previous status in Central Asia as well as its superpower one at the international level. All the while, China is seeking markets in Central Asia for expanding its economy and energy resources to keep her industries going. Some regional states consider the organization as a guarantee for survival, especially with the protection of China and Russia. The mixture of divergent objectives of each member and observer of the organization is not common. There is no limit of divergent objectives to aforesaid China-Russia relations but they are found within the SCO. For instance, China-Kazakhstan relations were also disturbed during the Peace Mission drills in 2007. However, Kazakhstan was a member and participant of the exercises, but could not conduct them due to internal problems of legislation and thus did not allow Chinese troops to go through her territory. A year later, Kazakhstan offered to host SCO war games. Another issue is the rivalry of Kazakhstan and Uzbekistan. During Peace Mission 2012, Uzbekistan didn’t participate in exercises and refused the request of Kazakhstan for passing through her soil. The Uzbek troops made a detour through Kyrgyzstan to reach Tajikistan. These issues are a question mark on the unity of SCO members. It looks that the organization is still unable to resolve some basic issues such as military transit via member state territories. Such differences and divergence of national interests and present cooperation among the states might change into disputes when considering the tense relations between Pakistan and India.

The Shanghai Cooperation Organization is a significant forum for the member states. The Central Asian countries are expecting that the SCO forum is not a single country-dominated organization and that they would play a significant role within the forum. Furthermore, SCO partners feel endangered by the China-Russia tandem. Both China and Russia have their own independent interests. In fact, the organization is dominated by the two great powers of the region. They also justifiably have an effect on the Central Asian states. Both countries can challenge each other if one undertakes an action that causes instability in the region. Such an environment is beneficial for the member states of Central Asia as well as South Asia. Hence, the Shanghai Cooperation Organization is an advantageous organization towards its members and observer states. There are opportunities for the member states to explore business and economic cooperation with one another. The Central Asian states pursue their own national interests within the Shanghai Cooperation Organization. China and Russia are the leading powers that contest each other and therefore are incapable of unilaterally ruling the other members of the organization. The SCO is the best forum for the regional states; moreover, the SCO demands lesser rule than the CSTO. The CSTO is under the control of Russia and without China as a counter-balance. Moscow has superiority in the CSTO and limits the liberty of the member states. The SCO is providing a platform for bilateral arrangement and a lot of liberty for its member states. Kyrgyzstan and Tajikistan are depending on Russia to fulfill their security and energy needs. On the other hand, Kazakhstan and Uzbekistan do not depend on Moscow for security but have intentions of friendly and pragmatic relations. Beijing and Moscow are eager to share the burden of security of the region at the expense of their own strategic interests without demanding any domestic transformations from the regional states. Consequently, the SCO has emerged as a convenient place for the member states, particularly the Central Asian ones, to preserve the domestic status quo by accommodating the ambitions of China and Russia within a single framework.

Contributed By Muhammad Akram Zaheer, PhD scholar in Political Science from the Islamia University of Bahawalpur and lecturer at Heritage International College Arifwala