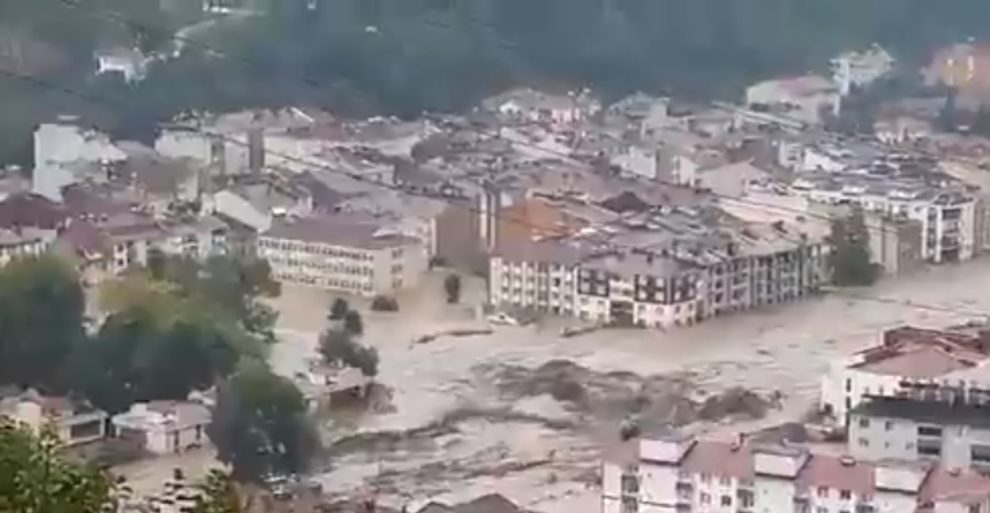 Floods in Bartin, Sinop, Kastamonu, and Karabuk provinces of Turkey have injured more than 13 people. Videos from the Black Sea region show multiple houses and vehicles being destroyed in result of flooding.

According to authorities, a new wave of floods caused by heavy rains hit Turkey’s northern Black Sea provinces on Wednesday, with one elderly woman missing and injuring 13 others.

Arife Unal, 85, went missing after her house was destroyed by floods in the Ulus district of Bartin, one of the hardest-hit areas. The search is being carried out by gendarmerie, coast guard, and Disaster and Emergency Management Authority (AFAD) teams, as well as locals.

However, reports are now coming from unofficial sources that mutiple people are missing after floods in Bartin, Sinop, Kastamonu, and Karabuk provinces.

Azdavay Mayor Osman Nuri Civelek said, ‘We have not seen anything like this in history. All of the stream beds overflowed.’

The floods also destroyed many homes and businesses in Bartin, as well as sweeping away vehicles.

Thirteen people were injured in different areas of Bartin after vehicles overturned as a result of a collapsed bridge. The injured were taken to hospitals in the area.

According to the disaster agency, power was out in a dozen villages in Bartin’s Ulus district.

Some people who got stranded by flood were rescued by a helicopter directed to Yenikonak village of Ayancık district.

According to AFAD, the floods also affected the Northern Sinop province, with a public hospital in the Ayancik district being evacuated.

Evacuation procedures were underway at the state hospital in Ayanck district of Sinop, where torrential rains caused floods and overflows. Patients were transferred via helicopter to vehicles and then to hospitals in safe areas.

Officials in the city of Sinop warned the public on social media that heavy rains would continue Wednesday and Thursday, threatening floods and landslides.

The floods also impacted the provinces of Karabuk and Kastamonu, causing damage to buildings, vehicles, and agricultural fields.

Videos of floods in Bartin, Sinop, Kastamonu, and Karabuk provinces of Turkey

BREAKING: Dozens missing after floods destroyed multiple houses and swept away vehicles in Kastamonu and Bartin provinces of Turkey pic.twitter.com/J8GHv0IdMq

19 people trapped in floods in Turkey's Black Sea province of Sinop were rescued by helicopter pic.twitter.com/TXRWO4QRUI

Terrible flooding in Turkey. This is a climate crisis!! #UprootTheSystem pic.twitter.com/hBhX7uCZg2