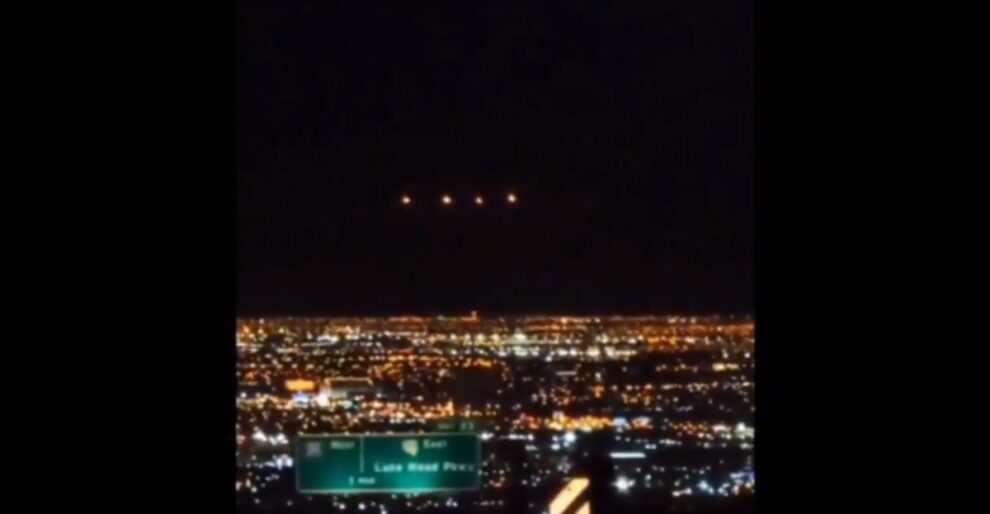 Hundreds of people have seen a mysterious series of lights over Las Vegas, storming Twitter with videos and pictures of the baffling “UFO“.

UFO claimed to have been spotted over Las Vegas

The lights, seen in numerous videos and photographs, spotted over Las Vegas around 7:30 p.m. Monday, March 1. People in different areas of the city have confirmed seeing them.

One could clearly see four to eight lights in the video and pictures. Most of the lights seemed like floating without movement.

One witness to the sight, Melanie Smith lives on the fourth floor of a building a few miles south of the Las Vegas Strip. She told that she saw the lights appear twice between 7:30 and 8:30.

In her video, she was recording in the direction of the north. Initially one could see seven lights. Four grouped together to the left of her view (west), another light was seen lower than the others, and two more to the right.

In her second video, she observed an eighth light that came just for a few seconds, but as she said in the recording it looked like it was on fire.

The person who recorded another video and posted it on Twitter said it looked like the lights were over Circa in downtown Las Vegas. Mystery Wire reached out to Circa who told it had nothing to do with lights in the sky.

Another video on Twitter showed the lights from a person recording in the southeast part of the valley in the northwest direction.

Mystery Wire traced the same location where this video was recorded. It was from Horizon Ridge Parkway near Horizon Drive.

While Nellis Air Force Base is on the right of this sight on the other part of the large mountain peak about 15 miles away. Many people on the internet assumed that the lights were military flares from Nellis jets.

The mysterious lights did not resemble military flares

But one person from the Department of Homeland Security, told Mystery Wire that the lights did not look like the military flares he has witnessed in the past. He said his mother-in-law saw a “mass behind the lights like it was one large object and not separate aircraft”.

However, the Federal Aviation Administration finally disclosed that the lights seen from the Las Vegas valley were “flares from the NW military ranges”.

These are very tame UFOs by Vegas standards pic.twitter.com/wwnYSMlQtJ

In rare hearing, Pentagon reports rise in UFOs in past 20 years

12 Las Vegas Hotels with a Spa and Fitness Center