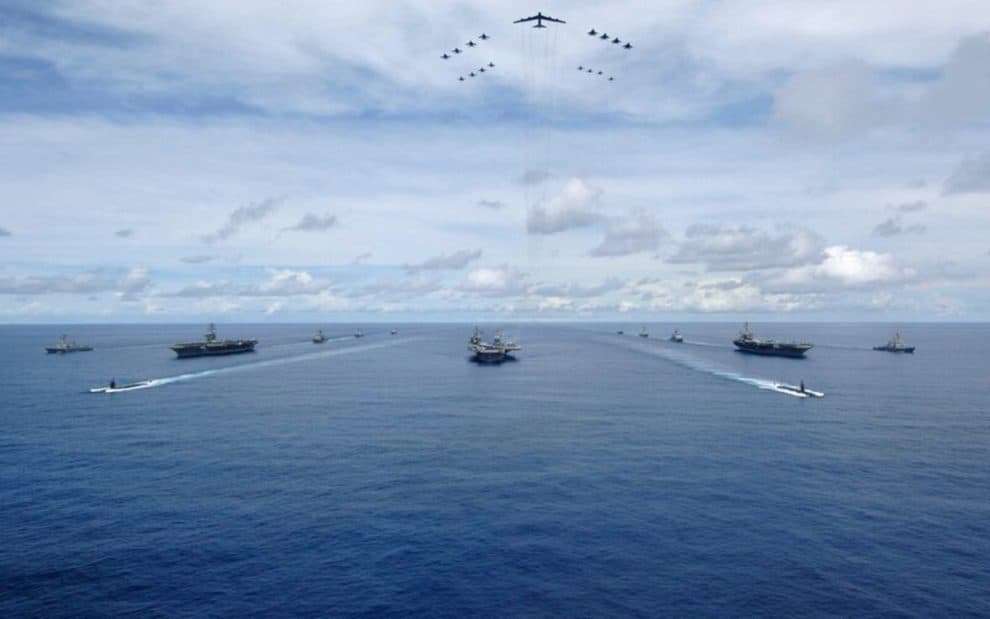 For some time, the United States has been experiencing a sharp drop in its maritime power. Countries such as Russia or China challenge the American naval dominance in different parts of the planet, and we are gradually observing the emergence of a multipolar maritime space. Faced with this scenario, Washington decided to change its strategy and create a new naval program, based on the need to protect its hegemony. In this sense, the heads of the US Navy, Marine Corps and Coast Guard met and developed a new strategy to regain American superiority at sea.

The military have created a new conspiracy speech about a “Russian-Chinese threat”.

The US joint naval forces presented a report entitled “Advantage at Sea: Dominance through Interagency Integration of Naval Forces”, in which they present their new strategy. It is a development initiative that considers the contemporary geopolitical situation and the current challenges faced by the military leaders of the US to ensure the defense of the country and the preservation of its hegemonic status. The military involved in drafting the document say that the situation of the geopolitics of the sea has changed radically since at least 2015, with several National States around the planet questioning the balance of naval power, both in their respective regions and globally. The recent economic, political, and social crisis in the US has strongly boosted this process of naval emancipation around the planet, as Washington gradually began to lose its capacity to react to its opponents’ maneuvers.

At the regional level, many countries challenge American naval power. A clear example is Iran, which has been attacking American ships in the Persian Gulf. But, globally, two countries stand out as the main challengers of American power, Russia and China. Daily, Russian and Chinese ships and aircraft interact with American vessels in different regions of the planet. These interactions have become more tense and aggressive and the level of excellence of Russian and Chinese naval forces is increasing, as admitted by the heads of the American armed forces – who, obviously, are concerned with such an improvement in the quality of their opponents.

In this way, the American military values a material modernization of its military capabilities and the elaboration of plans to contain the Russian and Chinese advance. According to the document, the objective of Moscow and Beijing is to dominate international waters in order to restructure the international order in their favor. The US role would be to prevent this by creating mechanisms that would allow it to maintain dominance over the largest possible extent of international waters, guaranteeing a maritime order led by Washington.

However, another important point, which is well worked out in the document, is the question of the need to control the available reserves of natural resources. International disputes over strategic areas have increased in recent years, recovering a global race for natural resources similar to that of the times of the industrial revolutions – but with an absolutely different purpose: to guarantee the survival of the States that dominate these reserves in the near future, which will be marked by severe scarcity of resources due to environmental degradation and climate change.

Again, the document stands against Russia and China, stating that such countries plan to control the natural reserves available in the maritime space with the aim of accumulating resources, limiting other countries’ access to such zones.

American discourse, in this sense, seems somewhat banal. Obviously, Russia and China want to acquire natural resources – this is the objective of any world power in our times. And, certainly, Moscow and Beijing will use all their military potential, naval or terrestrial, to dominate the largest possible number of nature reserves and guarantee the well-being of their peoples – as well as Washington, the Europeans and all the rest. Putting such a search for resources in a tone of denunciation, as if it were a crime, something wrong or reprehensible is an absolutely alarmist speech.

In any case, the development of a new naval strategy was predictable, considering that regaining American hegemonic status is an essential part of President-elect Joe Biden’s political agenda. Biden promises a more aggressive policy in the South China Sea and will certainly do the same in the Arctic, strategic regions in disputes against China and Russia, respectively. Most likely, the search for natural resources will be further intensified with the rise of Biden, considering that this is the ultimate goal behind all public discourse of green capitalism. In the end, American strategists again create an alarmist and conspiratorial discourse around a “Russian-Chinese threat”, when everyone’s goal is simply to guarantee their own interests.