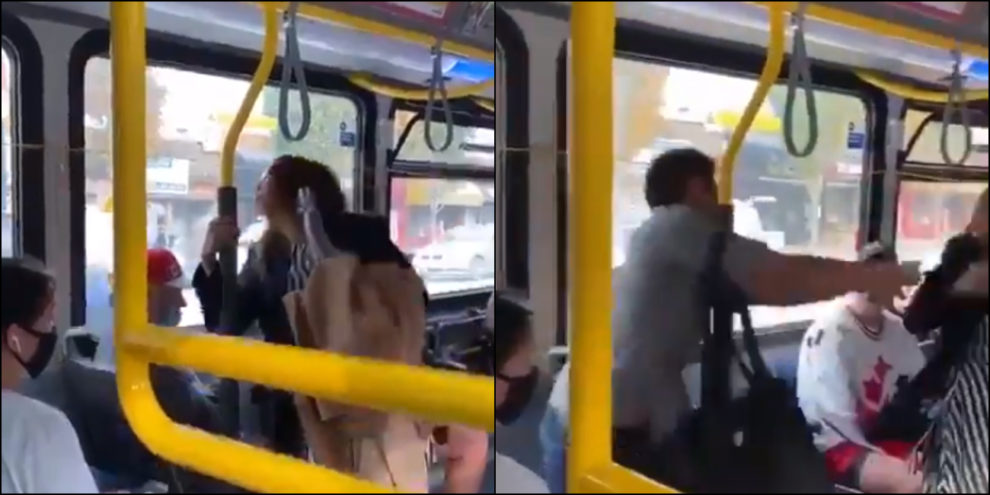 Metro Vancouver Transit Police are currently investigating the situation aired in a viral video online. The video shows a  violent encounter on a Vancouver transit bus involving an unnamed man, a woman. The video was initially posted on TikTok on Wednesday, the video went viral and was circulated over other various social media platforms. The video captures a woman as she spits on a passenger on the Vancouver bus. The man in the video responds by shoving the woman off the bus. The woman is seen falling on the pavement.

The video does not mention the reason behind the violent encounter. The man can be heard muttering “disgusting” while gesturing at the woman before she proceeds to spit on him. Transit police Sgt. Clint Hampton told the press that investigators are unsure regarding the circumstances surrounding the video. It is known that the unpleasant incident happened on Hastings Street near Nanaimo. “There’s some indications from the video itself, you see people are wearing shorts, t-shirts. We don’t know, was this back when we had better weather?” Hampton said in a statement.

VIRAL VIDEO: Woman spit on man face in Vancouver bus, man pushes her off the bus. Transit police are investigating the incident.#Canada pic.twitter.com/EwpxWQdDVg

The video shows a man shoving off a woman

Many people speculated that the two might have engaged in the violent correspondence over masks. Since the woman was not wearing a mask, it is possible that the man found it “disgusting” and she retaliated in response to his remark.

Metro Vancouver Transit Police has requested anyone who witnessed the incident to come forward and give details to the police, so incidents like these can be avoided in the future. Masks are a part of the mandatory protocol that passengers must adhere to on all modes of TransLink transit. Hampton further said that police are currently investigating if a dispute regarding masks resulted in the violent incident.

This video serves as a good reminder of kindness. Resorting to violence is never the answer, the man in the video who shoved her off the bus lacked basic decency. These are dark and difficult times, everyone can use a little kindness and empathy. If both people in the video showed even an ounce of tolerance, the incident would not have taken place.