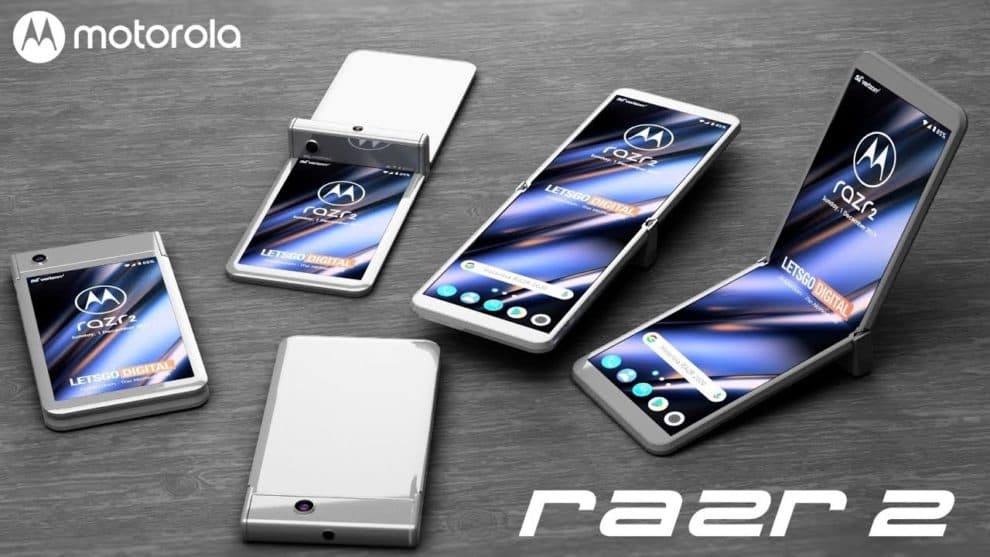 The classic Motorola Razr series launched officially in 2004. At that time, the series was one of the best phones, as it came with a unique appearance. Interestingly, Motorola was able to revive the brand last year, introducing an Android-based foldable smartphone that took its style and name from the classic series. Without a doubt, last year’s Motorola Razr is one of the best smartphones from the brand. It came with a 6.2-inch OLED display, 2510mAh battery, and 6GB of RAM. Apart from that, it came powered by the Snapdragon 710 processor. Looking at that, you’ll surely agree that the foldable device didn’t launch with impressive features. Well, that’s gone, and we’re already waiting for Motorola to come with a better second impression this year. In case you have an interest in knowing about the release date and specs of Motorola Razr 2, here’s everything we know so far.

Dousson, the general manager of Lenovo in South Africa, made that known while discussing the device with the Reframed Tech, as noted by Pocket-lint. Here’s a brief of what he said about the release date of a device, likely to be the Motorola Razr 2 device:

“There’s a new version coming up. There’s one in September, I think.”

Well, looking at what Dousson said, you’ll notice that he didn’t ascertain that the upcoming Razr 2 device will launch this year; he only said, “I think.”

Apart from that, we also heard back in May that the device might never launch in 2020, due to the impact of Coronavirus pandemic. The rumor came from a display industry insider Ross Young. Here’s a screenshot of what he tweeted regarding the release date of Motorola Razr 2 below: 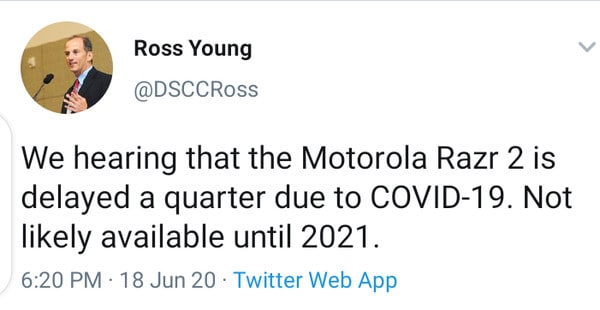 That’s all we know about the release date of the Razr 2. However, we’ll surely update you as soon as we find anything relating to it.

As for the price of the upcoming device, there’s yet to be an indication regarding how much it’ll cost. However, if the company decides to go with last year’s price tag, then don’t expect the device to come cheap. Motorola Razr came at a starting price of $1,500. That’s far too expensive when you consider the features offered by the foldable device. Recently, Motorola was able to slash the price of the original Razr device by 33%. Could that be a sign that the company will sell the upcoming smartphone at a low price?

As far as the specs of Motorola Razr 2 is concerned, we heard that the devices would be coming with a lot of improvements than last year’s foldable device. These include support for the 5G network, increased RAM, and battery upgrades.

Let’s have a quick look at what we’ve heard so far about the specs of Razr 2 below:

According to a report from XDA Developers, it talked about the likely specs of Razr 2. The report mentioned that the next-gen foldable device would come powered by the Qualcomm Snapdragon 765 chipset. Apart from Qualcomm’s top-of-the-line processor, the Snapdragon 865 series, other chipsets that support the 5G network include the 765, 765G, and 768 processors. With that, it means that the upcoming Razr 2 will add 5G support.

Besides that, the report also claimed that the device would come with a 6.2-inch OLED main foldable display, the same as last year’s device. It’ll also come with a secondary 2.69-inch OLED display. Apart from that, other Razr 2 specs revealed include a battery capacity of 2845 mAh with 18W fast charging, 8GB of RAM, and 256GB of internal storage. Also, it’ll launch running on Android 10 out of the box.

While these aren’t the best specs, they are definitely better than the ones featured on Motorola Razr 2019.

According to XDA Developers, the new Motorola Razr 2 device will come with improved camera specs. The report revealed that the foldable device would come with a 48MP Isocell Bright GM1 sensor and a 20-megapixel front camera. Well, looking at that, you’ll agree that it’s a significant improvement when you compare it with last year’s camera, which includes a 16MP rear camera and a 5MP selfie camera.

Unarguably, the Motorola Razr 2019 came with a charming and impressive look. However, that’s never enough to cover up for its poor specs and features – especially when you judge it by its high price tag. So, if the brand really has an interest in delivering a better second impression, it should work on providing its users with great specs and features.