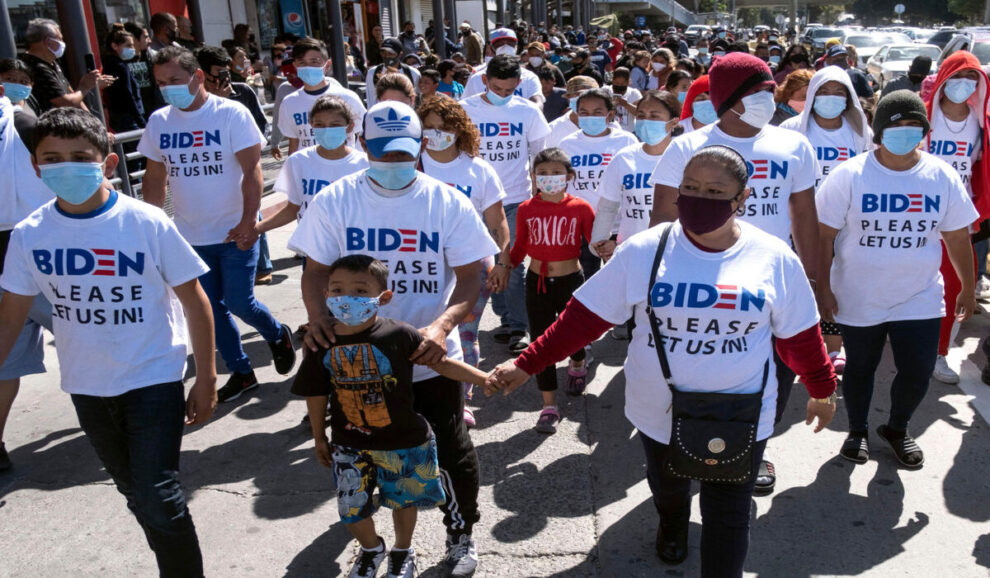 The migratory crisis in the US is increasing more and more. The number of illegal immigrants in the US has approached the record mark in the past 20 years. The data was announced by the Internal Security Secretary, Alejandro Mayorkas, on March 16. Mayorkas recently traveled to El Paso, Texas, with a team of politicians with the aim of closely monitoring the routine of patrol officers in controlling illegal migration. Commenting on the trip, Senator Rob Portman stated that “it was stunning to see how many people, including unaccompanied children, unlawfully crossed the border“.

Only this year, more than 100,000 people have already been captured trying to cross the southwest border – an increase of almost 30% over the same period last year. It is impossible to deny that such an exponential increase is due to the relaxation of inspection and control policies by the Biden government. The new president, spreading a liberal humanitarian speech, treats migration as a real agenda for his government. In fact, Democrats completely invert the logic with which immigrants are treated, abandoning the perspective of social defense, and adopting the vision of human rights. While it is necessary to preserve the dignity of immigrants and respect their rights, such a humanitarian concern must be accompanied by a look at security issues, which the Democrats refuse to do.

Biden’s promise to legalize more than 11 million illegal immigrants in the U.S. is viewed with hope and enthusiasm not only by foreigners who are already on American soil, but also by foreigners who still intend to migrate – with plans to achieve legality in a short or medium term. The reform of migration policies is an agenda that the Biden government cannot abandon if it wants to maintain its political stability. The public of legal immigrants – who, in general, also defend the legalization of illegal migrants because in many cases they have family or professional ties with such people – is largely favorable to Democrats and forms the main electoral base of the Biden government. In fact, Biden has an interest in immigrants for the future, not only of his government but of the entire Democratic Party: the more legal immigrants, the more votes for Democrats – so it is strategic to create a policy of free entry and systematic legalization.

That is the main reason why the White House totally denies that there is any migratory crisis. To endorse the discourse that migration does not bring any social problems is to endorse the ideal discourse for Democrats to gain more and more popular support. To disguise the visible problems of migration, the government is considering various strategies for dispersing foreigners. In this sense, it was recently announced that illegal immigrants from the southwestern border would be transported to the northern border, close to Canada, to carry out there their legalization process – no information was provided on where these immigrants would go later.

Canadians immediately showed concern and disapproval. Canada is currently facing some serious social problems. There is an internal crisis motivated by unemployment, which currently affects 2 million Canadians. In addition, 4 million Canadians are underemployed, affected by low wages and little protection with labor rights. What to expect if, facing this domestic scenario, Canada suddenly suffers from the side effects of the American migration crisis?

The labor issue is precisely the worst problem of migration. In degrading and even illegal conditions, migrants tend to accept any job, working longer for lower wages. Excluded from labor protection, foreigners create a precarious underemployment market that severely harms native workers – who, being protected by labor legislation and demanding higher wages, are less interesting to entrepreneurs than illegal migrants. This precarious and illegal labor market serves a large part of the American business community, mainly in the countryside, where there is less enforcement of labor laws and where job vacancies are temporary (according to the harvests), preventing the creation of permanent employment relationships. That is why migration for most entrepreneurs and the economic elite is a favorable and profitable agenda, as it favors their economic interests and harms the native working class. In the same vein, if illegal US migrants cross the border into Canada, which is already experiencing a labor crisis, the situation will get much worse, considering that Canadian entrepreneurs are likely to choose illegal labor.

Biden’s immigration policy, in fact, cannot have a future. This will lead to complete social chaos. Either migration is controlled by prioritizing the interests of native workers or a mass of native unemployed and foreign underemployed is created – which also tends to increase racial tensions and xenophobia. Either Biden revises his agenda, or we will have a social collapse in America. Still, it is necessary to emphasize that there is nothing humanitarian about allowing the exploitation of foreigners – this is the creation of a semi-slave labor market and must be condemned.