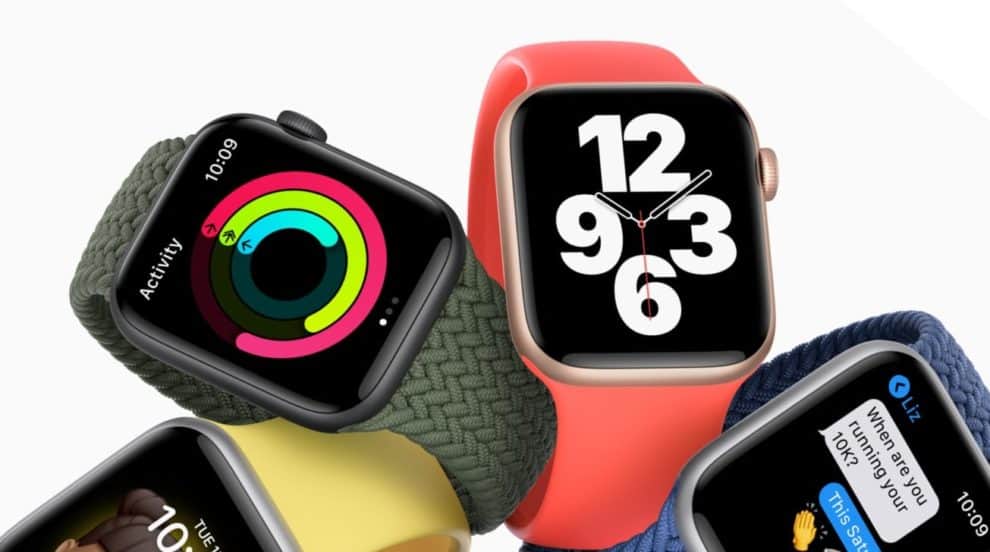 Apple launched the Series 6 Watch last month. It’s an impressive smartwatch jam-packed with exciting and life-saving features. But it leaves a lot to be desired. Series 6 has the same old design. The Apple Watch hasn’t received a radical design upgrade in years. The 2021 Apple Watch Series 7 is still about a year away. But a lot of fans have already been looking forward to it. Let’s take a look at the expected release date, rumored features, and other details of the Series 7.

The company managed to stick to the annual release cycle with Series 6 despite the COVID-19 pandemic. We expect the tech giant to launch the Apple Watch Series 7 in September 2021. The expected date for series 7 falls somewhere between October 2021 to September 2021. However, there can be changes to this schedule as nothing has been confirmed yet. One thing is confirmed for sure though, the new watches will be worth the wait!

The Apple Watch series pricing has been stable for years.

So the Apple Watch Series 7 will most likely be available at $399.

Apple seems determined to change the Apple Watch design in 2021. According to the ever-reliable Apple analyst Ming-Chi Kuo of TF International Securities, the 2021 Watch will boast a “significant form factor design change.” Apple fans around the world are excited to see these new changes to the external surface of the watch.

A new design could mean potential new colors. The current colors will either be removed or altered. This is because Apple never keeps a similar color palette for too long. Users are excited to see the appeal of new colors.

Apple’s design lab currently supports flat sides from the iPad Pro to the iPhone 12. Designer Wilson Nicklaus had created some render images showing a new Apple Watch with flat edges similar to the latest iPhone and iPad models. Other ideas could be reduced depth, variations in shape, or even more out-of-the-box design changes.

Apple has reportedly paid $330 million to Taiwan-based AU Optronics for the supply of microLED panels of 20-25 microns. The iPhone maker also owns a patent for integrating a Touch ID fingerprint sensor into a smartwatch. Apple could add the technology to next year’s Series 7 Watch. The biometric security feature would be a worthy upgrade.

The Apple Watch has increasingly become a health and fitness-focused smartwatch. The latest Series 6 has incredibly useful features that assist in improved health. These features include ECG monitoring, blood oxygen sensor, irregular heart rhythm notifications, and high and low heart rate notifications in addition to other things. We expect the upcoming Apple Watch Series 7 to introduce blood sugar monitoring. It will be particularly useful for diabetic patients.

The blood glucose optical sensor designed by Apple is likely to be a skin-top continuous monitoring solution that does not need an implant. The company has got secured patents around blood glucose monitoring, and it is supposedly “focusing on securing reliability and stability prior to commercialization of the technology.”

Apple is enthusiastic about physical health and mental health, the company has been adding these features to each new device. The blood oxygen monitoring feature was never cleared by FDA. To counter this, Apple has now characterized this feature as a “wellness feature” and not an accurate medical function. These new features depict an increasing trend towards health considerations that are supremely important in this day and age. There is also a possibility that by the time Apple officially launches the new lineup, the FDA would have approved the feature.

With the Fitbit Sense bringing a series of stress management tools, we expected Apple would follow it with similar features for Apple Watch 6. But it couldn’t come out in reality.

Mental health has become increasingly important, especially in the age of Facebook, Instagram, TikTok, and Snapchat. The ever-reliable Twitter tipster Jon Prosser said earlier this year that Apple was exploring “mental health capabilities” for its smartwatch. He said in a podcast:

“What their biggest focus on is right now and I hope it comes this year, it might come next year, but I hope it’s coming to WWDC is mental health capabilities. Where they can take the oxygen levels in your blood with your heart rate and determine if you’re hyperventilating. They can identify a panic attack before it happens and warn you on your watch. Especially if you’re driving, they’ll ask you to pull over and they’ll offer breathing exercises once you get pulled over.”

It’s too early to say how Apple would go about it. But we expect the Apple Watch Series 7 to detect anxiety, depression, and panic attacks. If it becomes a reality, it could save a lot of lives.

There have been a lot of rumors regarding Apple replacing the OLED displays on the Apple Watch for a while now. Apple is likely to replace the OLED display with either the Mini-LED or Micro-LED panels. The primary advantage of the newer displays is that they are comparatively thinner than previous models and offer better energy efficiency. These factors are pertinent for improved battery life. MacRumors revealed that 2021 could be the year when Apple finally decides to collaborate with Taiwanese display manufacturers. Apple will be working with this Taiwan-based manufacturer to come up with new panels for the Watch. This fits perfectly with the redesign rumors.

This feature is Apple’s new mix of NFC and Qi charging, this feature was also incorporated in the iPhone 12 series. The ability to charge the upcoming Apple Watch on the same pad as your phone and AirPods is so much efficient and we are quite surprised this feature had not arrived earlier.

As of now, using a passcode is the only way to lock an Apple Watch. But frankly enough, it gets boring to tap out those numbers.

Apple filed a patent, which was published in January 2021 that discusses a method that could offer a simpler way to get access to the Watch. It discusses a wearable device that fires light on the skin to produce a light field image from a body part that is different for every individual. Similar to a fingerprint, it will compare that to a saved match to allow unlocking the device with your wrist.

A Successful year for Apple

However, at the present time, Apple watches face more competition than perhaps ever before. This competition is strengthened by Samsung devices launching in 2021. In response to this increasing competition, a recent leak indicated that Apple is contemplating a major redesign for the Apple Watch Series 7. The watch is due to launch sometime in 2021 as the leak suggests. Several other devices by various other companies are launching at the same time as well.

Article updated with the latest information on Mar 25, 2021.