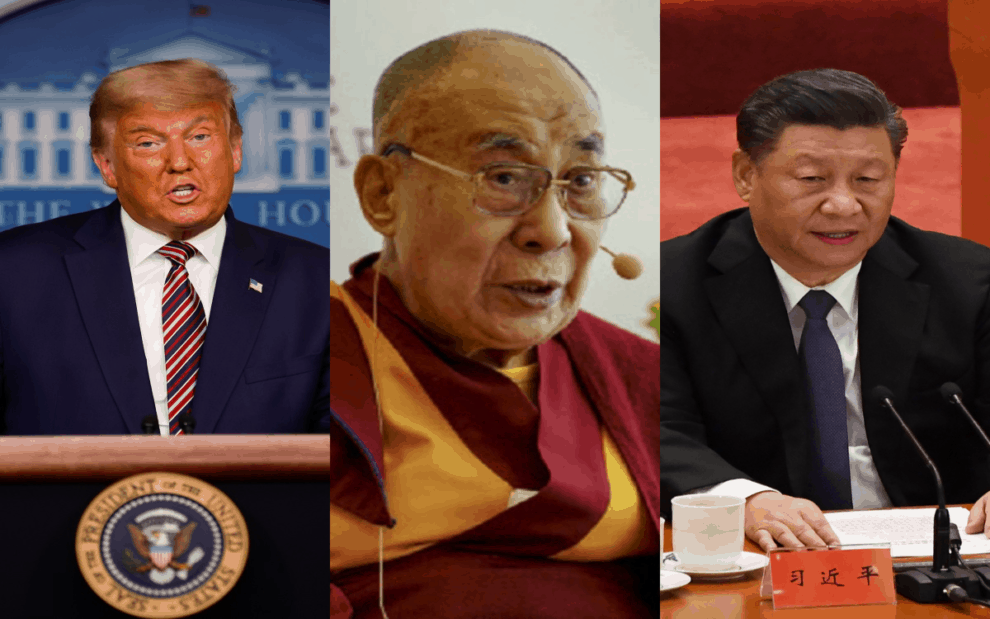 US President Donald Trump signed into law on Sunday the historic Tibet bill. US Congress had passed this bill on December 21. The Tibetan Policy and Support Act (TPSA), which supports Tibet in key areas, even includes possible sanctions against Chinese authorities should they try to appoint the next Dalai Lama themselves and calls for building an international coalition to ensure such appointment is only carried out by the Tibetan Buddhist community. The bill has bipartisan support and demands Beijing allow Washington to set up a consulate in the Tibetan capital of Lhasa. Finally, it has safety provisions regarding the Tibetan environment calling for greater international cooperation to monitor this issue besides providing funds.

China sees such move as interference in its internal affairs and has responded by announcing it could start imposing visa bans against US officials.

In 1995, the Chinese government arrested Gedhun Choekyi Nyima (aged 6 then) who was identified by the Dalai Lama as a reincarnation of the Panchen Lama who is the second most important figure in Tibetan Buddhism after the Dalai Lama himself. Gedhun Choekyi Nyima remains detained by Beijing, residing along with his family in an undisclosed location since 1995. In light of this incident, there are concerns over the choice of the next Dalai Lama. The current one, Tenzin Gyatso, the 14th Dalai Lama, is now 85 years old. From a Chinese perspective, Tibet is a domestic issue and the current 14th Dalai Lama (exiled in India) is a separatist. The Dalai Lama, besides being a spiritual leader for Tibetan Buddhists, is the Head of state of the Central Tibetan Administration in exile based in Dharamshala, India.

Foreign Ministry spokesperson Wang Wenbin warned last week after Congress passed the bill, that such “meddling in China’s internal affairs” could harm “cooperation and bilateral relations” between Washington and Beijing. Lobsang Sangay (president of the Central Tibetan Administration), stated that the Act sends a “powerful message” of “justice and hope” for Tibetans.

Over 80,000 in exile Tibetans currently reside in India, and 150,000  others live in other countries, especially the US and in Europe.

On November 23, Lobsang Sangay, Head of Tibet government-in-exile, visited the White House for first time in six decades. In October, the US named Robert Destro as its Human Rights Envoy for Tibet, a post which had been vacant since 2017.

The environmental provisions are clearly aimed at some Chinese projects in the Tibetan region. Retired Indian official Amitabh Mathur stated that after Trump signing the bill, “it’s time for India to also follow suit” blacklisting companies engaged in environmental damage through mining and other actions.

The Tibet issue can potentially increase Chinese-Indian tensions, especially after the Ladakh standoff. Tensions are already high. On December 14, Indian Chief of Defence Staff General Bipin Rawat commented that there was Chinese development work going on in Tibet but this should not be a cause for concern because India was “ready for any eventuality”.

China in fact plans to build a historic hydropower project in Tibet on the Yarlung Zangbo River, which also passes through Bangladesh and India. New Delhi is concerned that Chinese activities there could have ecological impacts. Part of the Tibet Autonomous Region, controlled by China, is claimed by India: the Aksai Chin region which is part of the larger Kashmir region claimed by India. India has often been accused by Beijing of using the Tibet issue as a kind of bargaining card.

Tibet is also important for China to access Pakistan (a traditional Indian rival) since Beijing has orchestrated the China Pakistan Economic Corridor infrastructure projects since 2013. The China Pakistan Economic Corridor complements the so-called Western Development plan, which includes Xinjiang, Tibet and Qinghai. One could say that in a number of ways, the Tibetan issue lies at the heart of India-China relations and tensions.

US President-Elect Joe Biden dreams of a great US-India alliance – after the new BECA US-India defence deal, and now such dream might become closer to reality. This new development regarding Tibet might place India in a position to be pressured to strongly support Tibet, further increasing Chinese-Indian tensions. As of now, India has its hands tied, so to speak. Should New Delhi take a clear stand on Tibet now, Chinese retaliation would be sure to follow. However, should the QUAD group (US, India, Japan and Australia) in fact become a kind of Asian NATO or something resembling it – as China fears – would India feel empowered enough to pursue such line of action regarding Tibet in the near future?

For Beijing, its interests in Tibet (as well as in the South China Sea) are essential; should New Delhi meddle into it, Beijing will retaliate. Tensions could then escalate, maybe even leading to a new Chinese-Indian war – ironically over the same border issue of the 1962 war.

Biden is expected to continue pursuing a kind of “dual containment” policy on both China and Russia. Nonetheless Biden has signaled, that the US under his presidency will antagonize Russia mainly, trying to isolate it from Europe as a kind of rogue state – while treating China more “cordially”, so to speak, as a competitor while trying to forge closer ties with India and other Chinese rivals to “counter” Beijing. That being so, Biden would be expected to back off from some of Trump’s policy regarding Tibet. However, the bipartisan support for the bill in the Congress, under the guise of “human rights” and “care for the environment” narrative will pressure him into not backing off. So, as is also the case with Trump’s support for Morocco (Trump’s “parting gift” to his successor, as it has been described), Biden might find himself with his hand tied too, in a way.

Once more, a US move has heightened tensions and may also have created a dilemma for all parties involved.