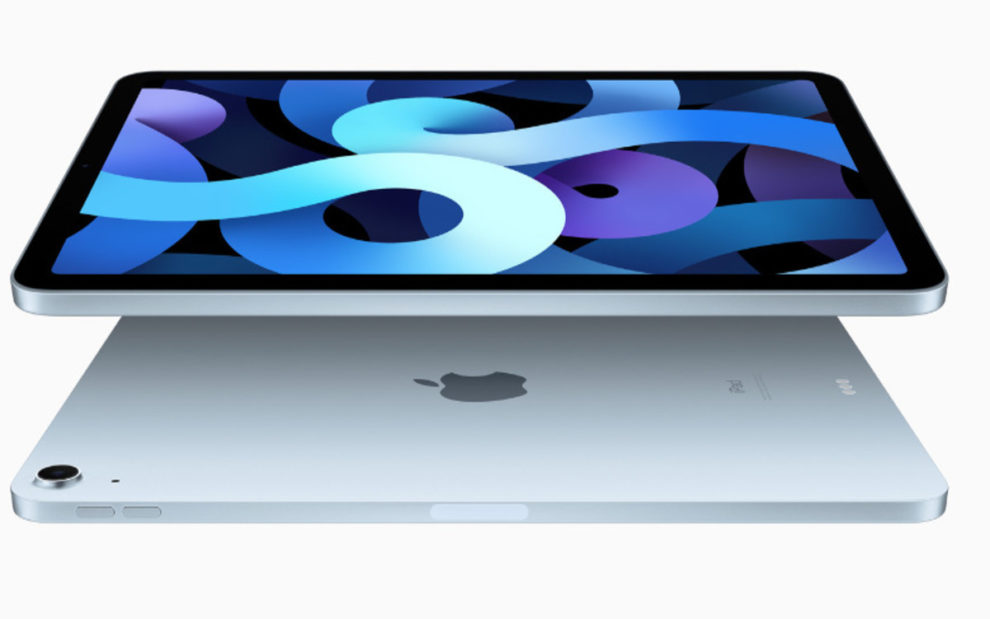 Reports suggest that Apple Stores are now receiving promotional material for the new iPad Air 4. Promotional material is an indicator that the iPad Air 4 will be available for sale soon. The iPad Air 4 was officially launched at the Apple’s “Time Flies” event on September 15. The Apple Watch 6 was unveiled at the same time as the iPad Air 4, but that’s already available to buy in-store and online. You won’t be able to buy an iPad Air 4 on the Apple website right now, you can see its price but the order won’t process.

The company made it clear that the new gadget would be available in October now, as October starts, it appears that Apple Stores are beginning to receive marketing materials to get geared up for the sales. Mark Gurman tweeted, “Apple marketing materials for the new iPad Air are starting to land at retail stores, suggesting a launch sooner rather than later. Apple said October, which is tomorrow — so not a surprise.”

Gurman says the unspecified marketing materials indicate that the launch is scheduled for early October. This may fit with Apple’s schedule, which is currently expected to see the launch of the “iPhone 12” range on October 13, with pre-orders and sales beginning shortly afterward.  It’s hardly solid confirmation, but Gurman is usually accurate in his Apple information. Another hint was dropped a few days ago by well-known tipster Jon Prosser on Twitter, telling people to simply “get your iPad Air money ready”.

The A14 Bionic is a 5nm chip with a six-core CPU with two high power and four low power cores. Apple claims a 40 percent boost in CPU performance over the A13 Bionic and a 30 percent jump in graphics performance with the new 4-core graphics architecture. Apple was also quick to include “breakthrough machine learning” performance for the A14 that it asserts will result in 10 times faster machine learning.

The iPad Air 4 price is set to start at $599 for a 64GB Wi-Fi-only model, this will increase to $879 for a 256GB LTE version. Apple is already promoting how you can buy using Apple Card and spread out the cost with interest-free installments. Although this newer version is a little heavy on the pocket, it is definitely worth every penny. In a first for Apple, it has a Touch ID fingerprint sensor built into the power button on the side.

UPDATE Sept.15, 2020: Just hours before Apple’s much-awaited ‘Time Flies’ event, the ever-reliable Twitter tipster Evan Blass has revealed that the tech giant is going to launch two iPads at the show. Here’s how you can watch the event, which is set to start at 10 AM PDT on Sept.15. There will be an iPad Air 4 and the 8th-gen iPad, along with other products.

According to Evan Blass, the iPad Air 4 would run a new A14 processor. It is also making the switch to USB-C port, just like the iPad Pro line. Its design would be similar to the iPad Pro. It could also feature a gesture-based navigation system. The iPad Air 4 would get a Smart Connector on the back to let users connect to accessories designed for the 11-inch iPad Pro.

The 8th-gen iPad would run the older A12X processor and continue to support the Lightning port. It won’t switch to the USB Type-C port. Users are unlikely to complain considering it will have an affordable price tag.

Besides, Apple could also unveil a new subscription bundle called the Apple One. According to Bloomberg, the bundle will comprise several tiers with combinations of Apple Music, Apple News, Apple TV+, Apple Arcade, and iCloud at discounted rates.

Apple iPad Air is the company’s second most top-end tablet, after the iPad Pro line. The Cupertino-based company released the iPad Air 3 on March 18, 2019. Also, the device came with a lot of amazing features, including a great display, and excellent performance. Apart from that, the tablet also offered support for Apple Pencil and Smart Keyboard. With that, a lot of iPad Air lovers are already anticipating what the next-generation will offer this year. Let’s check out everything the rumor mill has revealed about the iPad Air 4.

Popular analyst Ming-Chi Kuo had indicated that the iPad Air 4 would release later this year. According to Macotakara, Kuo suggested that the next-gen tablet will come in the second half of 2020.

Recently, Jon Prosser posted a tweet regarding the release date of some of Apple’s upcoming hardware products, including a new iPad, likely to be Air 4, and iPhone 12 devices. According to the popular tipster, Apple will unveil the new iPad alongside the Apple Watch on September 7 via a press release. Although it isn’t sure whether the device predicted here is the upcoming iPad Air, the predicted release date falls in line with that of analyst Kuo.

Here’s what Prosser posted regarding the new, adjusted Apple release dates below:

However, contrary to Prosser’s claim, another tipster Komiya revealed via Twitter that Apple will reveal the device by next March. Here’s a link to what the tipster posted in a tweet regarding the release date and specs of iPad Air 4.

Apple is reportedly working on a 10.8-inch iPad and an 11-inch iPad. The iPad Air 4 will likely have a 10.8-inch display. A leaked manual has indicated that the 10.8-inch model would be released as the Air 4. According to Ming-Chi Kuo, the Air 4 would ditch the physical Home button to give the tablet more uniform bezels.

The upcoming tablet would have a Liquid Retina display, the same technology used in the iPad Pro. Its design could also be similar to the iPad Pro, featuring squared and flat edges. Apple will reportedly move the Touch ID fingerprint sensor to the power button, considering there is no Home button. The iPad Air 4 is unlikely to get the expensive Face ID technology, though a few reports suggest it would.

Reports coming from Ming-Chi Kuo and other experts suggest Apple would also ditch the Lightning port in favor of a USB-C port on the iPad Air 4.

According to Twitter tipster Komiya, the upcoming Air 4 tablet would run a new A14X Bionic chipset based on the iPhone 12’s A14 Bionic processor. It would be a significant upgrade over the current iPad models, which run a customized version of the A12 Bionic. The new chipset powering the iPad Air 4 would be based on a 5nm manufacturing process.

Leaked schematics indicate it would have only a single camera on the back. There is no sign of a LiDAR sensor. If Apple is indeed focused on giving the new iPad Air latest features like USB-C and an iPad Pro-like squared-off design, it would also add support for the 2nd-gen Apple Pencil.

As for storage options, there would be 128GB, 256GB, and 512GB models, according to MyDrivers. Apple devices don’t support external storage.

Folks at MyDrivers have learned from their sources that the iPad Air 4 will have a starting price of $649. It would be a significant jump from the current iPad Air’s $499 starting price. But a price hike is expected considering the higher storage, new design, USB-C port, a faster processor, and other features. We will find out the official pricing soon.