Xiaomi introduced its latest custom Android skin, called MIUI 12, in April. And so far, the Chinese OEM has been able to roll out the stable version of the operating system to most of its eligible devices. Furthermore, MIUI 12 brings a host of amazing features and improvements over the previous release, MIUI 11. Some of the new offerings include new animations, live wallpapers, and many more. However, the custom Android skin isn’t without its issues. In the past, we’ve covered some of the issues reported by users regarding MIUI 12. In case you’re not aware, you can check here (1, 2, 3, 4) for more information about them. Although some of the issues have been resolved, some are yet to be resolved. That said, the latest reports across various social media platforms show that many users are now experiencing a battery drain issue on their MIUI 12 installed devices.

According to the latest reports, many MIUI 12 users have now taken to social media platforms, including Twitter and Mi Community, complaining that they are experiencing an annoying battery drain issue. Furthermore, looking at the complaints, it seems the problem is affecting most of Xiaomi’s products running the latest MIUI 12. Let’s quickly look at some of the complaints below:

According to @mhardik24, the Twitter and Redmi Note 8 Pro user reported that he’s experiencing a heavy battery drain issue on his MIUI 12 installed device. Looking at the report, it seems the battery drain issue isn’t the only one that the user is experiencing after receiving the MIUI 12 update. The user further added that the theme app doesn’t work properly while using both the mobile data & wi-fi. You can check below to see the screenshot of the report. 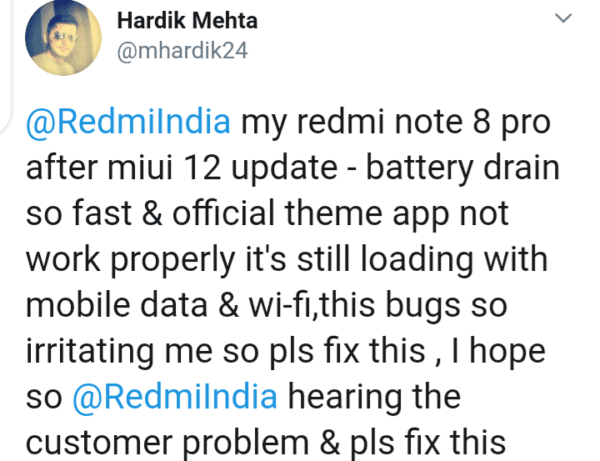 In case you’re also experiencing the MIUI 12 battery drain issue on your phone, it’s worth knowing that you’re not alone in this. You can also check here (1,2,3,4,5) for more complaints regarding the issue.

Is There Any Fix To Address The Issue?

At the moment, there’s yet to be a fix for the annoying MIUI 12 battery drain issue. However, according to a moderator, it seems the company is already aware of the issue and already working on a fix to address it. Furthermore, the Mod also mentioned that the problem exists because MIUI 12 is resource-heavy.

Here’s what the moderator said about the fix below:

“Apparently, it’s the same with all devices. MIUI 12 is really heavy on the battery. It’s a known issue and I hope they get optimized in coming builds.”

If what the moderator is anything to go by, it means we’ll have to wait for the company to roll out a fix. Since the release date of the update isn’t sure, we’ll continue to keep an eye on the company for you. As soon as we find anything worth sharing, we’ll let you know about it here.