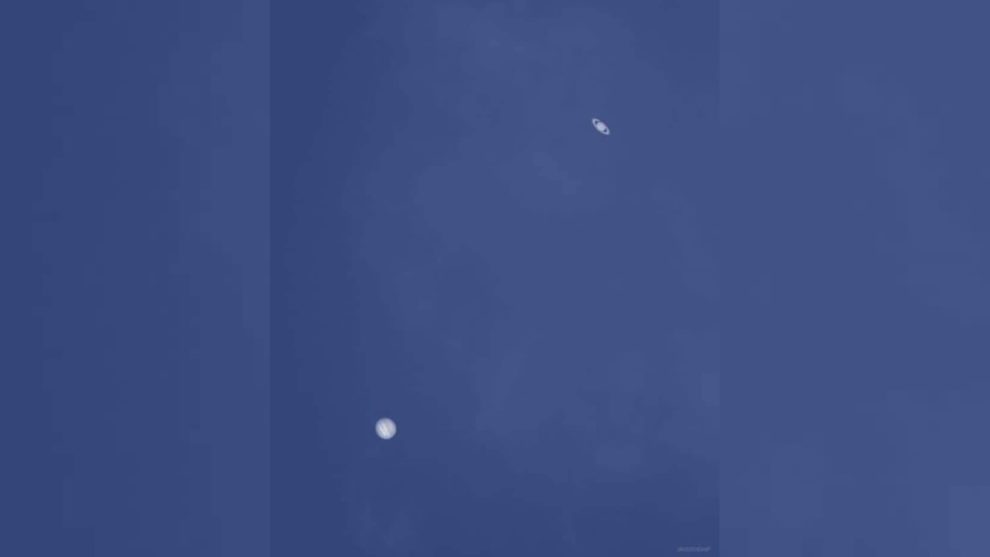 Daylight photos of Saturn and Jupiter captured by Matija Jakicevic, a 20-year-old astrophotographer from Croatia are currently going viral on social media, the aesthetically pleasing photos show Saturn and Jupiter against the bright blue sky. The photos have been captured with great skill, the rings around Saturn can be easily counted and the patterns on Jupiter’s surface can be easily observed.  The photos capture the movement of planets prior to the great conjunction that falls on December 21. Several posts shared on social media state that the photos are taken with a Nikon camera, however, in reality, these photos have been captured from a Skywatcher Explorer 150p eq 3-2 with Onstep Telescope and a T7c Astro Camera.

Matija Jakicevic’s message with the photos

“Saturn and Jupiter in the daylight! Swipe to see more!

“It is a composite image I made out of planetary shots of Jupiter and Saturn I took during the day. The point of that image is to show that it’s possible to take daytime shots of planets. The two weren’t that close in reality. Just a showcase of planetary daytime imaging.” Jakicevic told Insider Paper.

“I am preparing for the great conjunction happening on the 21st of December and [the photos] were taken by a Skywatcher Explorer 150p telescope, 2x barlow and t7c astro camera.” he added.

December 21st will mark the first Jupiter-Saturn conjunction since the year 2000, people will be able to witness this phenomenon after a period of 20 years. Apparent from the photos, the phenomenon is worth the wait.  The December 21st conjunction will also characterize the closest Jupiter-Saturn conjunction take is to take place since the year 1623, this was only 14 years after Galileo invented the first telescope to observe the skies. The great conjunction that took place in 2000 was angled at a certain angle that the view from earth was blurred by the sun’s glare.

The series of pictures captured by Matija Jakicevic from his Skywatcher Explorer 150p, eq3-2 with Onstep telescope and t7c Astro Camera show the composite and scientifically accurate scales both. On December 21st which also happens to be the day of December solstice, Saturn will be placed nearly twice as far from Earth as the distance from Jupiter will be.

The movement of these stars also has a great impact on people according to several theories. The movements of these planets is said to directly impact the people who align their birth with these planets. A user with a particularly keen interest in numerology tweeted, “At the Winter Solstice, on December 21, there will be an energy shift as Jupiter and Saturn both enter futuristic Aquarius in the days just ahead of the Solstice. These two sign changes signal one of the most important conjunctions in the last twenty years: the Great Conjunction.”

As the day of great conjunction draws near, the planets move closer towards each other as apparent in the daylight photos of Jupiter and Saturn. The photos captured by the t7c Astro Camera attempts to encapsulate the wonders of nature. The phenomenon will be visible from all across the world for people to witness. Make it is time to pick up your telescope.

Skywatchers in Japan spot Jupiter hit by another space rock