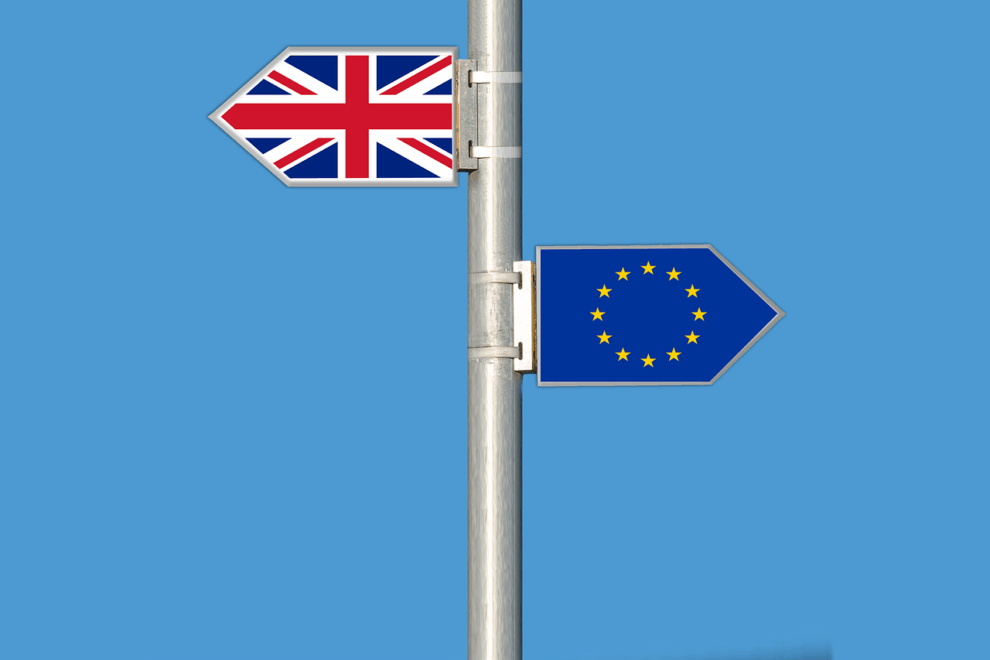 The UK and EU have finally agreed on a post-Brexit trade deal after months of deadlock, which means big changes will start from 1 January 2021. The UK and the EU’s Brexit agreement struck on Christmas Eve.

Statements by current and former PMs on Brexit deal

‘We will be your friend, your ally, your supporter, and indeed never let it be forgotten, your number one market.’ Prime Minister Boris Johnson ends by saying even though the UK has left the EU, we will remain ‘culturally and emotionally attached to Europe’.

It’s good to end a difficult year with some positive news. Trade deal is very welcome – and a vital step in building a new relationship with the EU as friends, neighbors and partners. Many congratulations to the UK negotiating team, said former Prime Minister David Cameron.

Very welcome news that the UK & EU have reached agreement on the terms of a deal – one that provides confidence to business and helps keep trade flowing. Looking forward to seeing the detail in the coming days, said another former Prime Minister Theresa May.

The European Commission just snuck out this infographic on the  EU and UK trade Brexit deal vs EU membership: 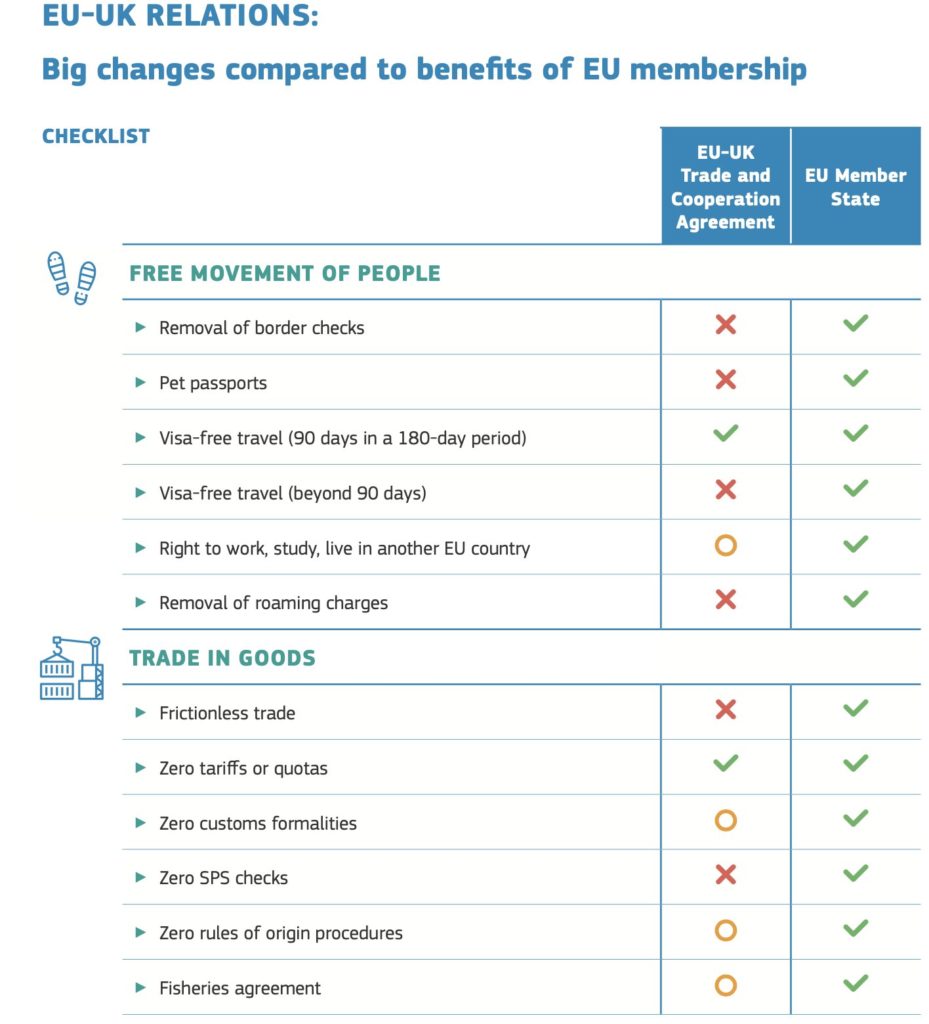 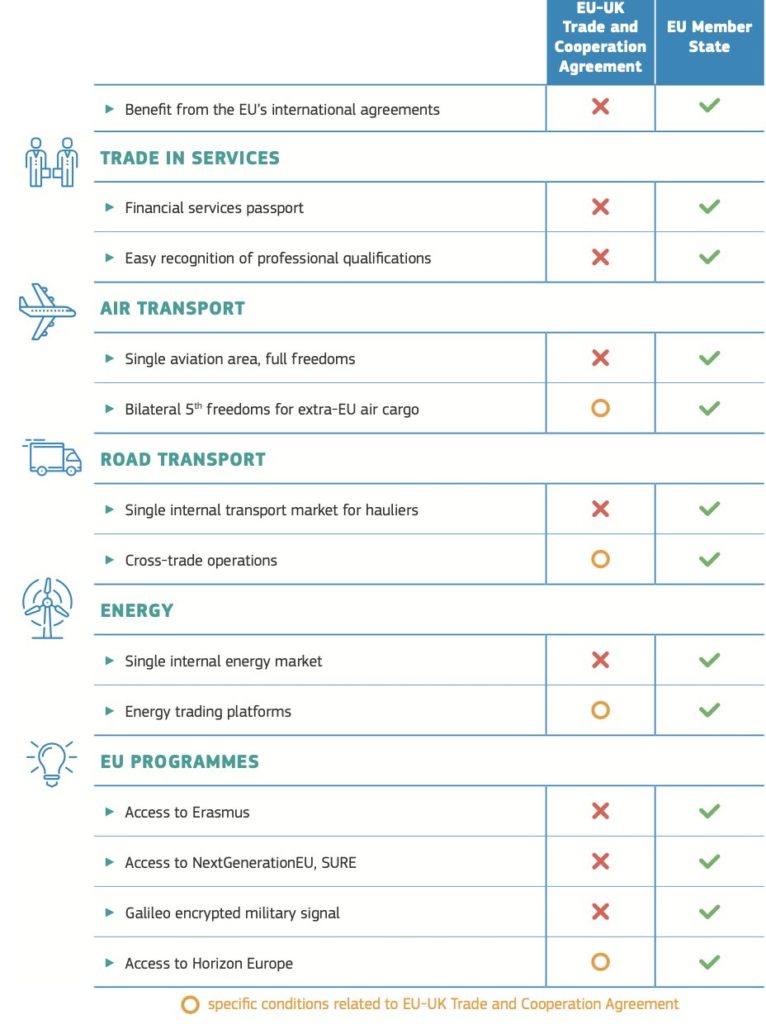 Full text or statement by European Commission on EU and UK’s Brexit deal:

After intensive negotiations, the European Commission has reached today an agreement with the United Kingdom on the terms of its future cooperation with the European Union.

President of the European Commission, Ursula von der Leyen said: “It was worth fighting for this deal because we now have a fair and balanced agreement with the UK, which will protect our European interests, ensure fair competition, and provide much needed predictability for our fishing communities. Finally, we can leave Brexit behind us and look to the future. Europe is now moving on.”

The European Commission’s Chief Negotiator, Michel Barnier, said: “We have now come to the end of a very intensive four-year period, particularly over the past nine months, during which we negotiated the UK’s orderly withdrawal from the EU and a brand new partnership, which we have finally agreed today. The protection of our interests has been front and centre throughout these negotiations and I am pleased that we have managed to do so. It is now for the European Parliament and the Council to have their say on this agreement.”

Foreign policy, external security and defence cooperation is not covered by the Agreement as the UK did not want to negotiate this matter. As of 1 January 2021, there will therefore be no framework in place between the UK and the EU to develop and coordinate joint responses to foreign policy challenges, for instance the imposition of sanctions on third country nationals or economies.

The Trade and Cooperation Agreement covers a number of areas that are in the EU’s interest. It goes well beyond traditional free trade agreements and provides a solid basis for preserving our longstanding friendship and cooperation. It safeguards the integrity of the Single Market and the indivisibility of the Four Freedoms (people, goods, services and capital). It reflects the fact that the UK is leaving the EU’s ecosystem of common rules, supervision and enforcement mechanisms, and can therefore no longer enjoy the benefits of EU membership or the Single Market.  Nevertheless, the Agreement will by no means match the significant advantages that the UK enjoyed as a Member State of the EU.

Even with the new EU-UK Trade and Cooperation Agreement in place, there will be big changes on 1 January 2021.

On that date, the UK will leave the EU Single Market and Customs Union, as well as all EU policies and international agreements. The free movement of persons, goods, services and capital between the UK and the EU will end.

The EU and the UK will form two separate markets; two distinct regulatory and legal spaces. This will create barriers to trade in goods and services and to cross-border mobility and exchanges that do not exist today – in both directions.

The Withdrawal Agreement remains in place, protecting amongst other things the rights of EU citizens and UK nationals, the EU’s financial interests, and crucially, peace and stability on the island of Ireland. The full and timely implementation of this agreement has been a key priority for the European Union.

Thanks to intensive discussions between the EU and the UK in the Joint Committee and the various Specialised Committees, the Withdrawal Agreement – and the Protocol on Ireland and Northern Ireland, in particular – will be implemented on 1 January.

On 17 December, the EU-UK Joint Committee met to endorse all formal decisions and other practical solutions related to the implementation of the Withdrawal Agreement. As part of these mutually agreed solutions, the UK has agreed to withdraw the contentious clauses of the UK Internal Market Bill, and will not introduce any similar provisions in the Taxation Bill.

The entry into application of the Trade and Cooperation Agreement is a matter of special urgency.

The Commission will swiftly propose Council decisions on the signature and provisional application, and on the conclusion of the Agreement.

The Council, acting by the unanimity of all 27 Member States, will then need to adopt a decision authorising the signature of the Agreement and its provisional application as of 1 January 2021. Once this process is concluded, the Trade and Cooperation Agreement between the EU and the UK can be formally signed.

The European Parliament will then be asked to give its consent to the Agreement.

As a last step on the EU side, the Council must adopt the decision on the conclusion of the Agreement.