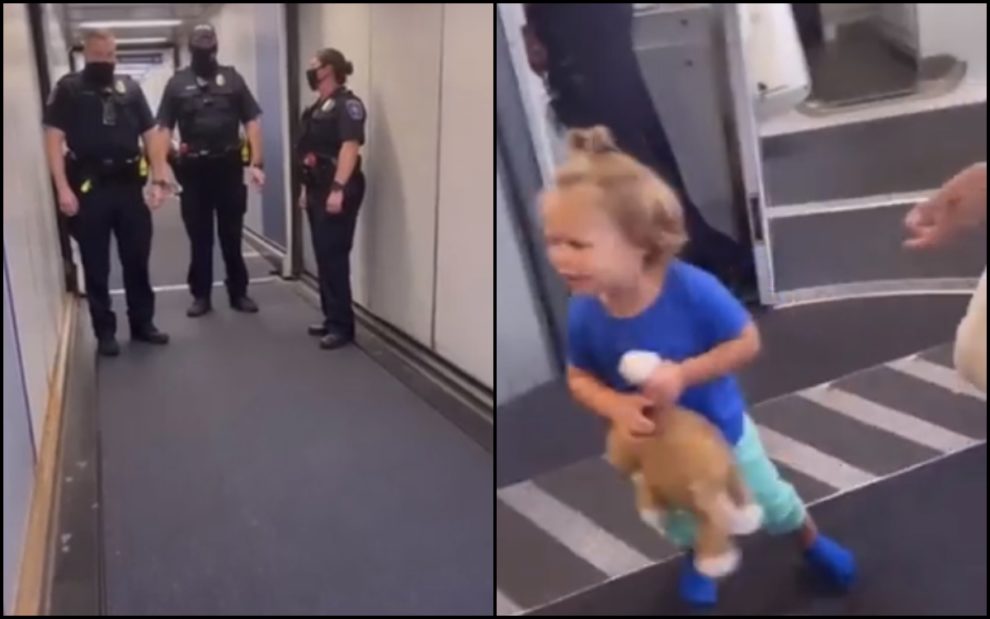 This week, a family including a mother Amanda Pendarvis and her child were escorted off an American Airlines flight after the asthmatic toddler struggled to keep his mask on. The video of the incident has gone viral on social media.

The mother of a two-year-old asthmatic has slammed the “truly evil, power-tripping” flight attendant who kicked her family off an American Airlines flight due to mask compliance.

Instagram user Amanda Pendarvis claimed in the video posted and shared on social media on Monday that her family was met by police after their flight to Colorado was cancelled due to an altercation with a flight attendant.

Amanda Pendarvis and her young son (toddler), Waylon, were flying on AA Flight 1284 from Dallas to Colorado when the flight attendant noticed the child was having difficulty keeping his mask on.

Hello, maybe we get flight attendant fired from @AmericanAir today?

My sweet friend’s 2 year old son was having an asthma attack and wouldn’t keep mask on (because he couldn’t breathe) – and they turned plane around and had police waiting to escort them off. A 2 year old. pic.twitter.com/Ks2VbnNASW

“He got on the intercom and to say to the entire plane, ‘I’m sorry for the delay but we are dealing with a non-compliant traveler,” Pendarvis said of the encounter.

“I was not refusing a mask, nor did I even say I wouldn’t try to keep a mask on my son. We were escorted off the plane as I was holding a mask over his little face. I genuinely don’t have words.”

Pendarvis, claimed that the majority of passengers appeared to support her over the airline.

Because of the flight attendant, Carl, she described the situation as “the most humiliating/traumatizing experience.”

“He had the plane turned around and had us escorted off to be met by police officers. Why? Wait for it … because my two-year-old was not properly wearing a mask,” she said.

“Mind you, Way is asthmatic. We had showed [flight attendant] a negative Covid-19 test Way had yesterday. Told him he has asthma and has never worn a mask before. He did not care that this asthmatic child was literally hyperventilating.”

“On Sept. 13, American Airlines flight 1284 returned to the gate prior to departure from Dallas-Fort Worth (DFW) to deplane a party on board,” American Airlines spokesperson said. “Initial reports indicate the party refused to comply with crew member instructions to remain seated and wear a face mask securely over their nose and mouth. After agreeing to adhere to federal face-covering requirements, all individuals were rebooked for travel on the next flight to Colorado Springs (COS).”

The Biden administration’s mask mandate requires all public transportation passengers aged two and up to wear a face mask unless they are eating or drinking, or they are unable to wear one due to a disability.

American Airlines does provide a disability exemption for wearing masks, but passengers must obtain one in advance. According to reports, the Pendarvis family did not have one.

“Initial reports indicate the party refused to comply with crew member instructions to remain seated and wear a face mask securely over their nose and mouth,” an American Airlines spokesman told Live and Let’s Fly.