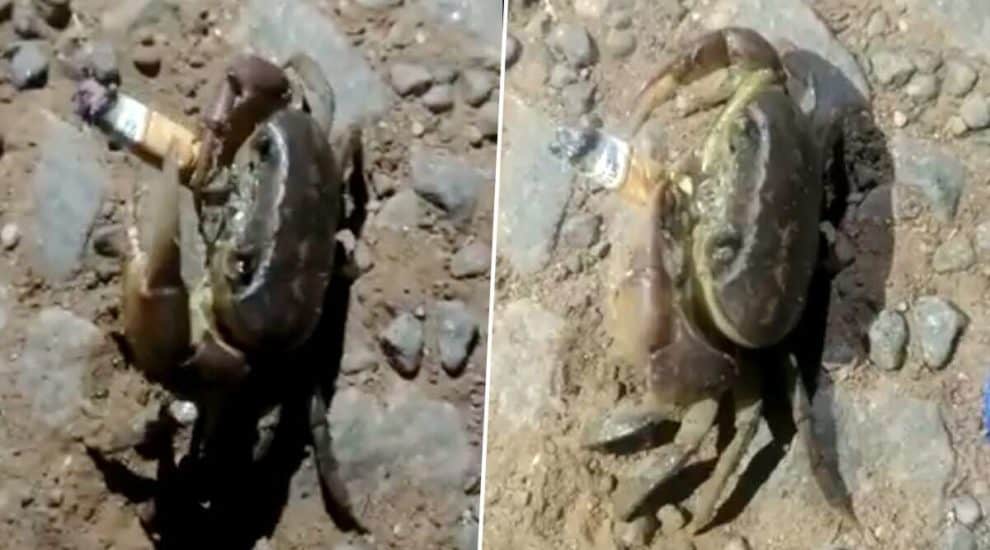 According to the latest happenings, a very strange video of a crab has now gone viral across various social media platforms. Speaking of it, the crab was captured on a clip smoking a cigarette by some people, who were having fun on a beach. So far, the video has raised a lot of mixed reactions among Twitter users.

A viral video of a crab smoking cigarette has raised a lot of comments across social media platforms, including Twiter. Furthermore, the viral video, which has a rather funny caption on Twitter, was first posted by an account, with the username @natureloversrk. Here’s what the caption looks like below:

“Another thing to see in 2020 is A Crab Smoke Cigarette
Source:- what’s up..
“Tip:- cigarette smoking is injurious to health”

Speaking of the 35-second viral video, which you’ll be able to watch below, it starts with the crab holding the cigarette with its claws. Shortly after, it puffs it and exhales it, just exactly the way humans smoke. Furthermore, the crab was able to smoke the cigarette a couple of times before trying to move away from the camera.

You can check below to watch the viral video of the crab:

After watching the already viral video, many people were surprised to see the crab smoking cigarette like a pro. However, according to some people, they said, it’s really a stupid thing to expose nature and animals to harmful things like cigarette. Let’s have a quick look at some of the reactions below:

According to @TheFab_Maddy, the user said:

“Nature and animals shouldn’t be suffering bcoz of our stupidity. We as humans are unimaginably irresponsible and narrow-minded to be damaging the very planet we are living in… Furthermore, the consequences are going to be very severe if this goes on… Worst. Nightmare. Ever.”

Also, according to @rmrajrit, the user feels there’s nothing funny about the video. Here’s what the user said below:

“And people are sharing on WhatsApp as if it’s a joke… Not at all serious about the things they are doing, which is harmful to nature and wildlife.”