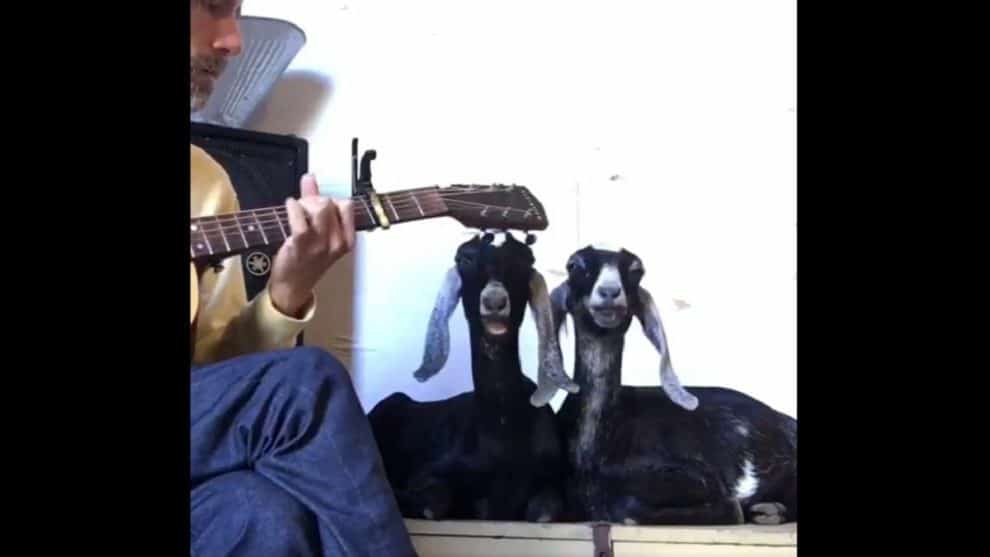 A video making rounds on social media shows a pair of goats eating their food in sync with the tune playing on the guitar. The guitarist is playing “Happy is the Way I Feel” by Christopher Walters. The pair of black goats sitting by the guitarist seems to be enjoying themselves as they move their mouths to mimic the tune of the song.

Social media users have been liking, retweeting and commenting on the video. Many people were seen posting it with the caption, “concert of the goats.” While many others expressed envy regarding their chill lifestyle, who wouldn’t want to eat their food while listening to a concert? Eminent from the spark in their eyes, the pair of black goats are truly the embodiment of happiness. (“Happy is the Way I Feel” after seeing the goats too!)

Most people are unaware of the fact that animals also enjoy and resonate with the music. The happy reaction given by goats reiterates the fact that music is a universal language, every living being feels it and reacts to it. Regardless of whether they understand the tune or not, or whether they are able to interpret the lyrics, all living beings resonate with the tune of music. Goats are visibly enjoying the happy tune. It makes one wonder, would the reaction have differed if the guitarist decided to play a sad tune?

Music is a universal language

Goats are known to have an intimate relationship with music, and many farmers have manipulated it to their benefit. Cypress Grove is known for his ability to provide worlds’ class goat cheese. In an interview, he revealed his big secret. When the staff at the creamery is milking about 900 goats each day, the goats are made to listen to jazz music.

Music is the key, Cypress Grove further revealed that jazz music has calming effects on animals. Jazz music helps goats block out any outside noises that may distract them, this includes noises from construction works nearby or just the regular hustle-bustle of the area. The jazz music creates a relaxing routine for the goats by reducing their stress levels. Relaxed goats produce better milk which helps produce the best goat cheese.

A stress-free environment has multiple benefits for animals as well as humans. Music, especially happy and calm tunes are reported to considerably reduce stress levels. The pair of goats in the video are moving their mouths in sync with the tune the guitarist plays, its almost as if they are dancing to the rhythm. The black pair of goats are now celebrities on social media. Maybe you should try playing “Happy is the Way I Feel” to your pet and record their reaction too!

Goats reacting to the tune of ‘Happy is the Way I Feel’ – Video: